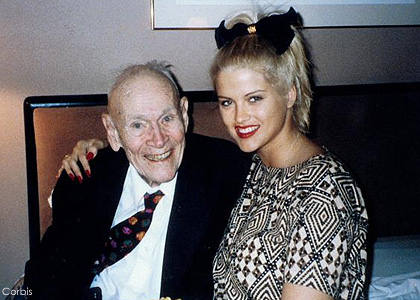 I was home the other day watching Tyra. This is the type of thing I do when I’m bored and feel like infuriating (inspiring!) myself. The topic of the show was “Sugar daddies” and “sugar babies”. Not to be confused with the teeth destroying carmel treat, this episode was talking about young attractive women who date older, wealthy men. These relationships are rarely based on physical contact and , most of the time, equal out to some dude buying some broad shoes all the time…or maybe even paying for her education.
As a man who lives by a very different code than these people, this topic has always been an interesting one to me. There are so many angles to approach it from (and so many years of therapy that need to be had on both ends of this equation) , allow me to try and wrap my head around it in list form. As you may know, I can think much clearer when there is a numbering system involved.

Most of these girls were very open about their “No sex” rule, pertaining to the gentlemen they were “Dating”. That means, these dudes are well aware that the most they will get out of this relationship is hanging out platonically with a young girl who won’t fuck them in a million years. This brings about a few thoughts.

a) Why would anyone want to willfully hang out with these vapid cunts if the possibility of sex was not involved. We all like pretty girls and , certainly, being around one in social settings is a nice ego boast (and it doesn’t hurt social status either). But save that shit for your picture album when it can have some shelflife. Taking this girl out, buying her shit and not getting to fuck her is beyond stupid. It’s like bargaining for the worst possible deal. “Hey, can I have terrible conversations all day and lose money , then go home and furiously masturbate to the impossible thought of me fucking some girl I have no business even talking to?”. Sounds ideal, bro.

b) When men are younger, we go through this thing with girls often where we are “friends” but want to have sex with them yet they are “oblivious”. Personally, I don’t think they really are blind to the truth. I think they just choose to ignore it cause they like the dude as a friend and are not attracted to him OR they’re content emotionally milking his soul until he eventually cracks and the friendship comes to a screeching halt. The thing about these youthful relationships is that the man will put up with way more than he normally would just based of the faint hope that, one day, he can get it in. That flickering ember of hope can burn for years if the girl plays it right. But this kind of thing should only happen to young men. After a point, we simply begin to care less and be less infatuated with certain girls. I suppose we realize that there are , indeed, tons of other fish in the sea. And many of them won’t make you watch them try on clothes before going to meet some dude she actually will be fucking. So, my point is, these are old men who already know this yet continue to shower these obviously undeserving girls with gift. This makes them complete fucking morons and deserving of whatever misery these relationships bring upon them.

2)The “Every girl should be treated like a princess” syndrome

Whenever this kind of topic is discussed on TV shows, there is always a girl who feels the need to justify her obviously wrong behavior with the “every girl needs to be treated like a princess” argument. Now, while this is one of the dumbest things a person can say in a public forum , I can’t even really blame the girl. I’d say the blame falls squarely on the shoulders of her shitty parents…or more precisely, her shitty dad. Her dad could have abandoned her at an early age or just bent to her will her whole life, spoiling her relentlessly as if she were special…but it’s on him. So, if your daughter ever brings home a dude that looks like one of your tennis buddies, guess what? You fucked up. The only solace you can take is that she’s probably not fucking him. Congrats.

3)You should be ashamed of you old ass self

I get that older men will always crave younger flesh. I mean, shit, I watch porn with girls who are too young for me but , in real life, I’d feel like a total creep even talking to. However, with the sexual aspect of it off the table, what’s to gain here? Status amongst your loser ass old friends? Who gives a shit? You should have kids by now anyway and they should be older than the girl you’re buying shoes for.
Even more curious is the reality of the situation. If you’re hanging out with these girls, it’s not all just swiping credit cards. There’s talking involved. What the fuck do you two have to talk about? You think Lady GaGa is a baby diaper and she’s never heard of the Beatles. That , coupled with the no sex clause, would be more than enough to keep me away from that situation forever.

4)The lifespan of a sugar baby

Women have it rough when it comes to aging. While us men tend to get more “distinguished” with age, many women hit a physical wall hard and the drop off is brutal. Because of this, whenever women put all their eggs in the “I’m attractive” basket, it will always be a short term thing. yes, this old man likes your hot 24 year old body and firm tits. 10 years down the line, however, you’ll just be another worn out old bitch he’s tired of supporting. The whole concept of women trying to maintain their youthful looks well past the point of return has resulted in a generation of plastic faced duck ghouls. There’s certainly a “keeping up with the joneses” vibe to it , as you can see by watching any “real housewives” variation. But there is no fooling youth (unless you’re a freak of nature like Marisa Tomei , Stacy Dash or Cindy Crawford). Aging will always be victorious and the more work you have done, the more you end up looking like a melting wax sculpture of a lioness. Sugar daddies may be lonely fucking losers but they’re nothing if not looks obsessed. That’s why they have sugar babies in the first place. Young , hot ass. Not “formerly hot, kinda grasping onto their youth but failing” ass. So, just know, that if you’re dating an old dude, you’re on just as much of a clock as he is (except his clock ending results in a funeral and yours results in 4 cats in a one bedroom apartment).

There are few things more creepy than hearing a young girl describe her boyfriend/sugar daddy with that sentence. Holy shit. You don’t fuck your dad! And dad, you don’t fuck your daughter! Much like “The friend zone” , “The dad zone” exists and it’s even more impenetrable. If a girl tells you you are like a father, close down shop and move out. Granted, daddy issues do run deep amongst women but if she says that and hasn’t fucked you yet, the deal is off. There’s not bouncing back from that. All the Viagra, sports cars and weekend trips in the world won’t change the fact that when she looks at you, she sees a dork in a bathrobe reading the morning paper while complaining about the consistency of the scrambled eggs he’s eating.

Ahh…I needed to get that out. I feel much better now.

6 thoughts on “Sugar daddies and babies”