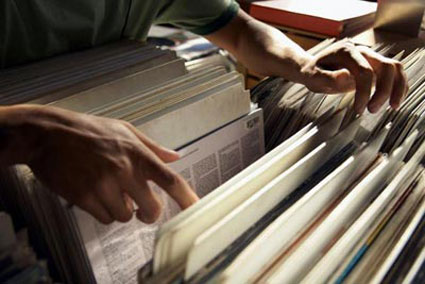 This title may be misleading. The point of this is not to tell you what samples might get you sued or what has already been used on previously released song.. No, this is a bit different. My idea here is to list certain red flags you should keep an eye out for when going through a record/records. These things are a quick way for you to know what to skip over and not waste your time on. Basically, this is my guide to shortcut crate digging.
Keep in mind, every producer is different. One mans trash and all that shit…So, this is what I avoid when I’m going through records:

Acoustic guitars
Now, I’m not saying all acoustic guitars are bad for sampling. Sometimes you’ll hear a great riff and it works fine. I’ve certainly used some in my career. However, 99% of the time it’s some boring ass chord progression , weakly played and questionably recorded. Anytime I hear a beat made with one of these as the main loop, I know that motherfucker who made it was just being lazy. It passes off as some emotional , mellow groove but really it’s just crappy. Acoustic guitar chord progressions are for singer/songwriter types to use merely as background to their song writing. They aren’t meant to stand on their own. The second you hear that first wimpy strum, skip over that shit…in fact, be prepared to skip the whole album cause 9/10 times all the songs will sound the same.

Laughing/crying
This is kinda random but anytime a song begins with a person laughing or crying, I’ve noticed it leads into some bullshit. Either some fluffy cornball song about a baby being born or some song about a dead person set to a completely forgettable backdrop. If you hear either of these sounds, skip it. It only gets worse from there.
On a similar note, anytime a song starts with a clock ticking or spaceship sounds, you might be about to hear something awesome.

Loud drums
Unless your one of those lazy producers who simply loops some shit and calls it a beat, samples with drums in them are not your friend. Sure, you can work around them but if they are dominating the loop, it usually won’t work, if you plan on adding more layers to it. I can’t count how many times i’ve heard an amazing loop that I simply didn’t end up using cause they recorded the drums too loudly and no filtering could fix that. I say, look for samples without the drums in them. At worst, samples with some light percussion. But if you hear some that sounds like a finished beat before you even sample it, just let it go or save it for a mix tape track.

Watch the time signature/swing
It blows my mind when I hear a producer try and loop a sample that’s obviously in a swing rhythm and try and make into a boom bap type track. Being a producer is pretty easy. In terms of musical theory, we’re an ignorant bunch yet we manage to get away with it. But we should at least be able to recognize that , sometimes, loops are just not gonna work due to the swing. There are exceptions to this (“Guns and cigarettes” By Atmosphere is a good example of it working out well) but usually it just leads to a confusing track that just doesn’t sit right on the drums. unless you’re making instrumental beats, there’s a good chance you’ll never need a swing rhythm track for an MC. Some can rock that kinda track but they’re few and far between.
The same goes for samples that are not in 4/4 time signature. I don’t care how dope a loop it is, sometimes you just have to accept that it’s not gonna work how you want it to. Unless your name is Mumbles and you’re working with Aceyalone on “A book of human language”, non-4/4 beats are risky to pull off (where rappers are concerned).

Never underestimate filtering
Sometimes you have a loop you like but it’s too crowded. There are drums in it, horns, and all sorts of little sounds. But, really, you just wanna have it as a loop that will be the spine of the beat. So, filter that shit. Make it into a baseline (if that’s possible). Not only will it open up possibilities for layering but it also will hide the sample better from how it sounded originally and you can worry less about getting sued.

Some genres just don’t work
Again, there are exceptions for all these rules….but sometimes you just need to give up on trying to flip that hawaiian hula record. Certain genres just aren’t made for sampling. Let’s go through some:
1)Hawaiian music
2)Polka
3)old country music (though you might find some great vocals in them)
4)most ethnic music heavy in percussion
5)Classical music (not cause it’s unusable, but because it’s just corny to me to sample classical music)
6)Jazz before 1950
7)most opera music

Music that will frustrate you
First off, Fuck free jazz. It’s the most annoying shit to try and sample cause it’s usually atonal and all over the place. I’ve found bits and pieces over the years but it meant wading through hours of pretentious mayhem disguised as music. Skip it.
Secondly, every now and then, you’ll come across an artist who seems like they would have endless dope samples. But, for some reason, they never do. Case in point: Jean Luc Ponty
This dude is an fusion-y electric violin player from the 70’s. His album covers look like acid trips (always a good sign when digging), they’re always in the dollar bin and they always have amazing sounds on them. The only problem is, for some reason, this Ponty motherfucker refused to leave anything open. It’s like he’s constantly got 8 instruments going at once so you can never extract that one little sound you like. It’s extra frustrating cause he would have all sorts of awesome sounds going. I mean electric violin! It’s so perfect for sampling but, alas, no dice. There are tons of artists like this and , at some point, you gotta stop chasing the dragon and just stop buying their records. I’ll admit, I bought like 6 of his records before I finally quit him. fuck that guy.

The “Everything sounds the same” curse

I’ll often come across a record that specializes in one sound. A flute, or a klezmer or a vocal group from Botswana. These records are perfect for finding layers cause they never have drums and they’re full of random little riffs that you can work with. The issue here is controlling yourself. These records are good for one, MAYBE 2 uses. It will be tempting to constantly go back to them cause they’re so ripe for the picking, but just hold you head. the best you can do if go through it and find the best possible part and use that. Another downside to these types of records is that they all sound exactly the same. Every flute song sounds like the last flute song. So, prepare for a tedious journey.
Take it from me. I raped some old flute records when I was coming up and I’m still shaking the “guy who samples tons of flutes” stigma to this very day.

Well, that’s just for starters. hope that helped some of you wet behind the ears beat makers. If you got anymore questions about this kinda shit, feel free to ask below.