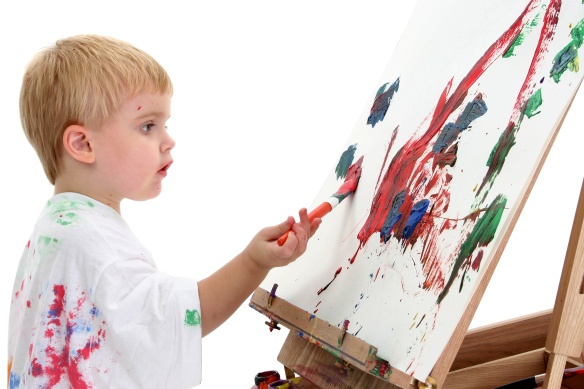 I recently unearthed a box of old cartoons I drew when I must have been between the ages of 7-11. Back then, all I did was collect Garbage pail kids and read “The Far Side”. Because of this, my cartoons were basically mind numbingly terrible rip offs of both those things but with a twist of crazy. Apparently, I was a pretty weird fucking kid. I figured it would be fun to share some of these with you guys cause, really, I’ve been cracking up looking at them the last few days.
I find this all especially funny cause I come from an artistic family. My dad was an artist, a few of my siblings are artists and there are a few more scattered around the family tree. However, I seemingly did not inherit this skill. I could not (and still can’t) draw a circle. Seriously, I was and currently am fucking TERRIBLE at all things drawing related. So, here are some of my fake Garbage Pail Kids characters. I’ll throw the rest up at a later date. BEHOLD! 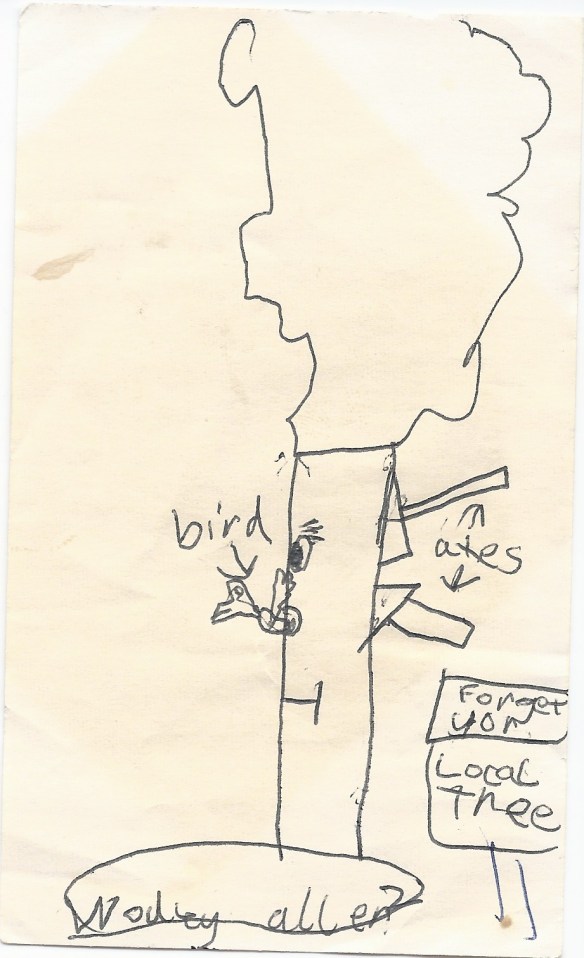 Woody Allen
Because I was such a shitty artist, I had a habit of telling the reader what they were looking at in case it wasn’t clear. Thus the arrows pointing and the words “Axes” and “bird”. This is something I still do to this very day when playing “Draw Something”. Some might call it cheating, I call it evening the playing field.
I’m still trying to figure out the “Forget your local tree” Sign to his right. Perhaps this was my 9 year old self being all environmentally conscious and shit. Who knows. 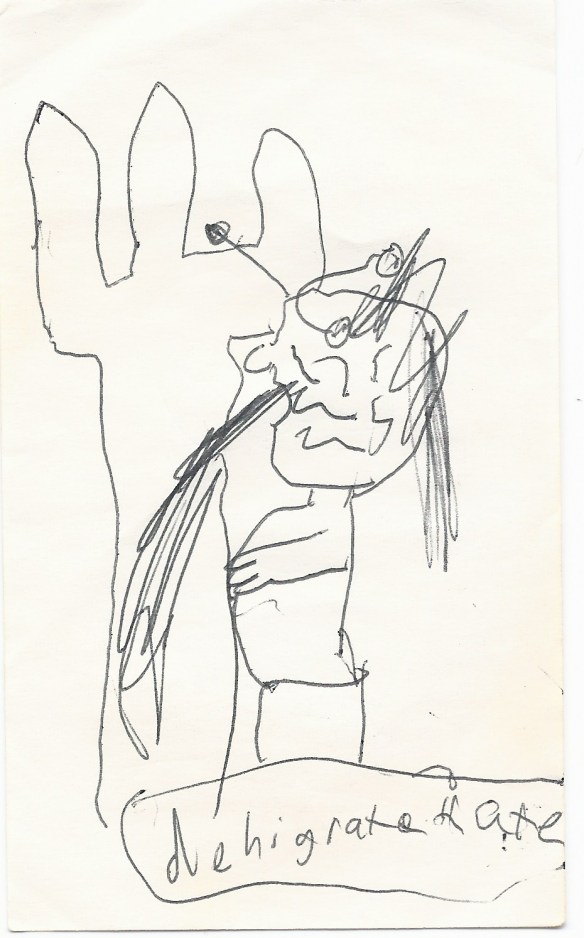 Yes, I’ve always been a bad speller.
A common theme you may see in a few of these is that I loved barf jokes. If there was room for me to throw vomit anywhere near a cartoon, I was all in. To be honest, I’m kinda shocked my 9 year old self even knew that people might throw up when they were insanely dehydrated. Especially when standing in front of a prick-less cactus. Oh, and if you can’t tell, those are her eyes bursting out of her skull, no doubt from the force in which she is vomiting. 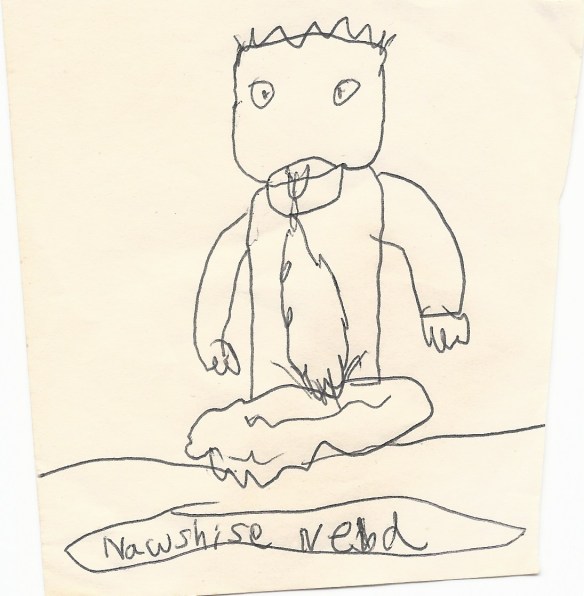 Again with the vomiting. I’m not gonna lie, I still have look up the spelling of “Nauseous” to this day, so I don’t even feel bad about how comically off my spelling was. This one is what it is. Simple. effective. 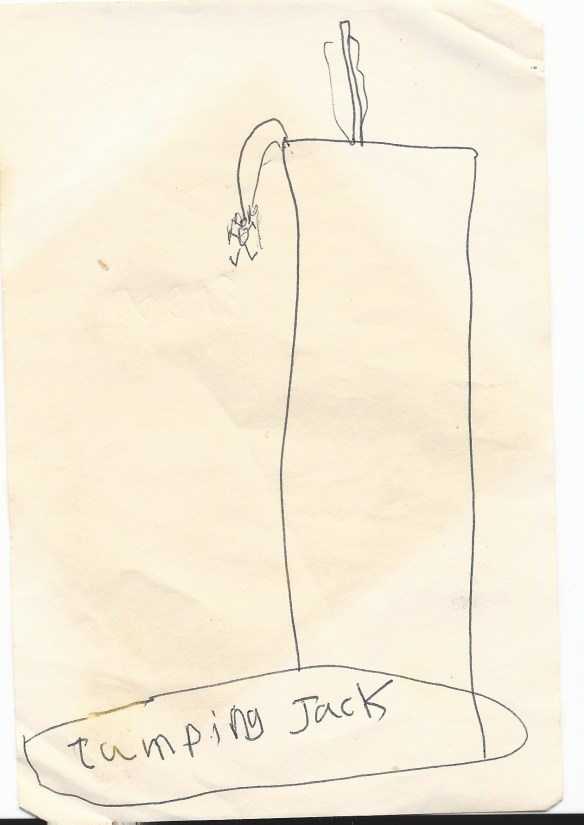 This one could have been extra awesome had I incorporated flashing into it and made “Jumping Jack Flash” but I doubt my art skills were up to the task of portraying that. Here we have jack jumping off one of the World trade center towers. Yes, this was a pre-9/11 world we lived in where little boys were free to draw cartoons of suicidal men plunging to their demise. AMERICAAAAAAA!!!! 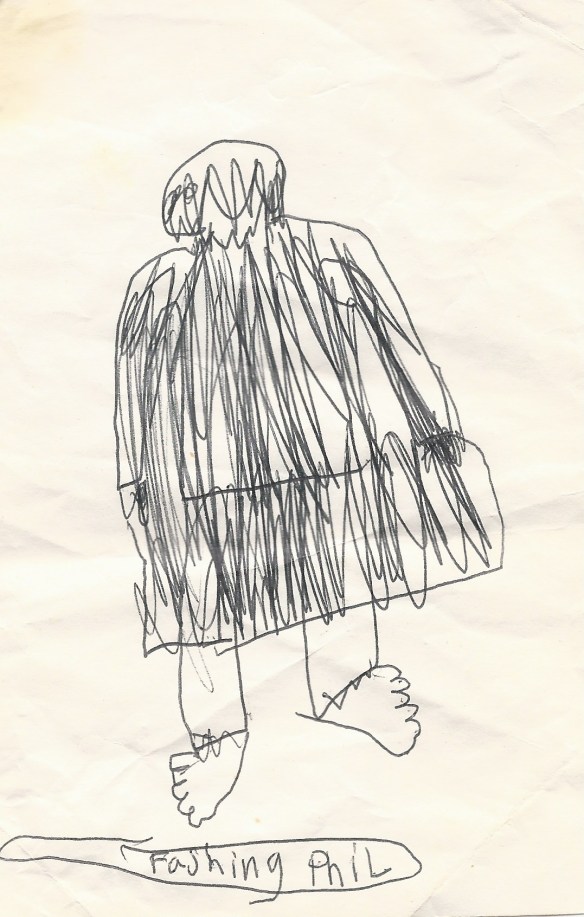 Ah..perhaps I skipped the “Jumping Jack Flash” idea cause I had already come up with this banger. I must say, I went about it pretty tastefully. Sure, I could of drawn all sorts of cock and balls up in this but I took the high road. Also, Phil seems to be wearing a hooded rain jacket or something. Regardless, you don’t wanna see what the other side of that drawing would have looked like. 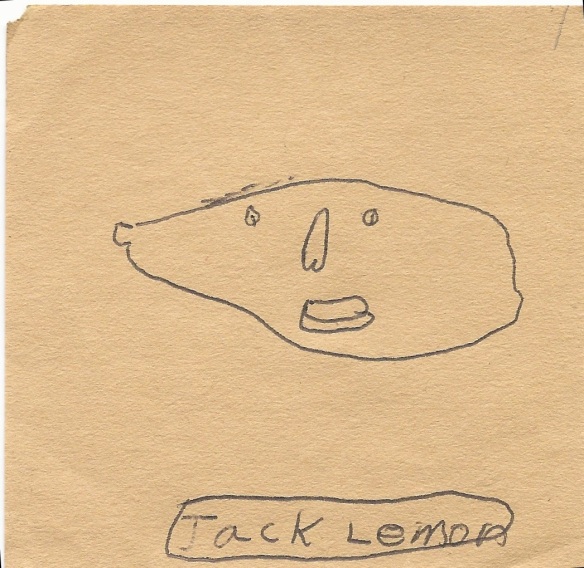 Jack Lemon
I dunno but this one feels like it could be some abstract street art. I could see this tagged all around town and people eventually wearing “Jack Lemon” shirts. Any one out there wanna make that happen, go for it.
I’m honestly shocked i even knew who Jack Lemmon was back then but one things for sure, the kid (Me) loved himself a good pun. 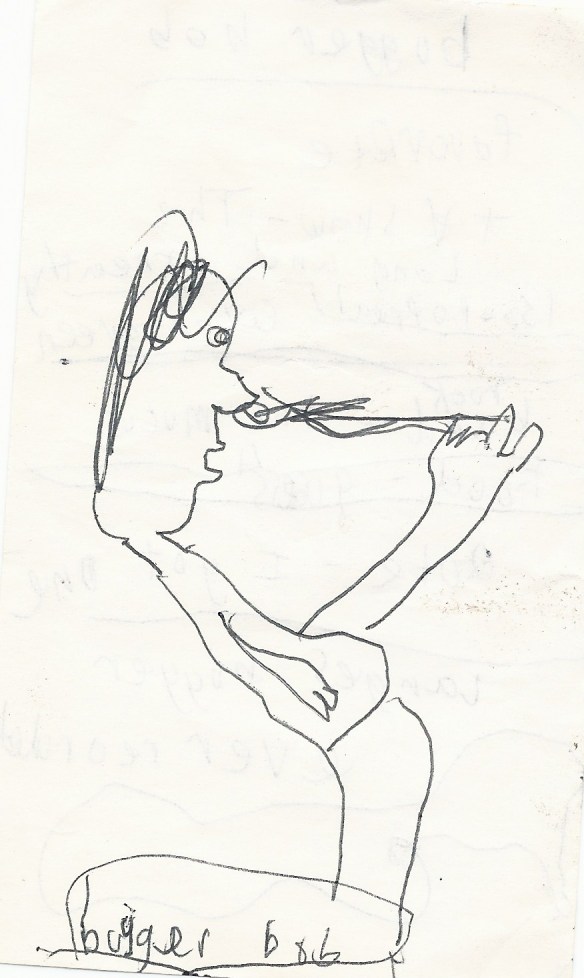 This dude got the moves like Jagger.
It’s no secret, adolescent boys love a good bodily fluid joke. Boogers, barf, farts, pee, poop…the cornerstone of all young humor. Suffice to say, that never changes.
My misspelling here was interesting. “Bugger Bob” could have been a whole different thing but I was too young and not british enough to realize it. 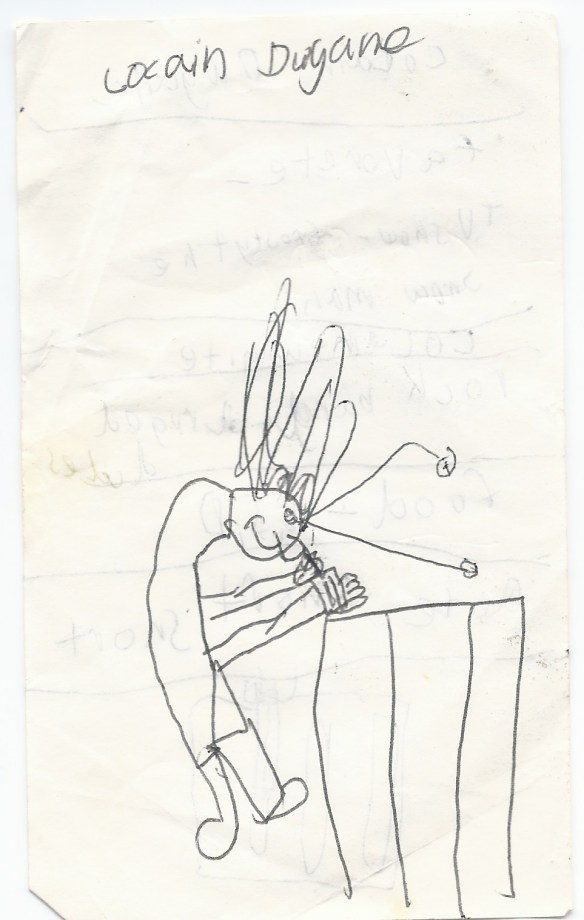 This one is pretty much my favorite. For sooooooo many reasons. But first and foremost, cause I happened to write somewhat of stat sheet on the back, explaining a little extra about our friend Dwyane 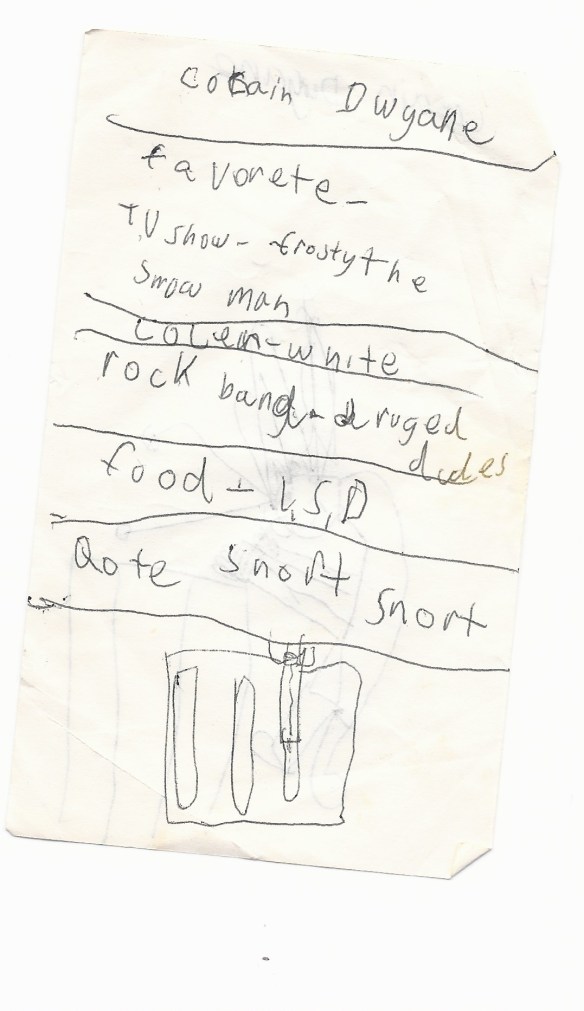 It reads like a Clipse verse. His rock band “Drugged dudes” must have been pretty awesome.
This one is especially crazy cause HOW THE FUCK DID I KNOW ANYTHING ABOUT COCAINE AT THAT AGE?!?!?! I was way too aware at that age I guess…or maybe I had a coke head baby sitter and I just don’t remember it. Whatever the case, it’s clear that your boy Cocain Dwyane likes to party…to the point where, much like “Dehydrate Kate”, his eyes pop out of his head. It’s 25 years later now and i’ve seen all sorts of real life coked out people…and I’m pretty sure Dwyane puts them all to shame. If you can snort coke till your eyes pop out WHILE SMILING, come holler at your boy Dwyane. He got that pure snow.