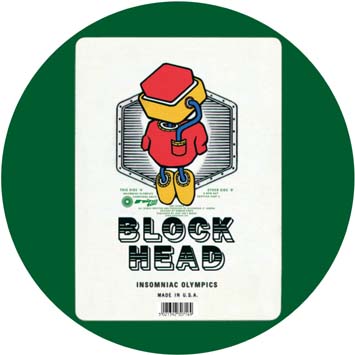 A few weeks back, I wrote about making my first solo album “Music By Cavelight”. In case you mised it, peep it HERE. There was too much to cover in one post so here’s the second part of that rundown.
Instead of doing a long winded intro, I figured I’d jump right in where I left off…

When I first made this beat, I had no idea what to do with it. The mood was strange and the drums just didn’t seem like something anyone would wanna rap over. I mean, had I known some double timing southern rappers at the time, that might have been different but I didn’t.
I mentioned in the first part that of this that I was making this album with the idea of “What an instrumental rap album should sound like” but basing it off almost nothing. This song is a great example cause I took this beat and made it fall apart and turn into something completely different. From the 2:19 mark on is my brain actively going “Okay, this is what instrumental producers do…” which is funny cause, at this point, I don’t think they really do or ever did. If they do, I sure haven’t heard it.

This beat was LITERALLY the first beat I ever saved to floppy disk. I made it around 96/97. Prior to that, I was just recording all my track on to my four track cause I didn’t know how to save things on to disk. I can even vaguely remember making it. My sampler didn’t ahve a stand yet so it was just on the ground. I’d sit indian style and just make beats while chilling on the rig of my bedroom in my parents house.
So, this beat was by far the oldest track I was working with on this album. The idea to make a three part series kinda popped out at me when I was putting together the album. I had these three slow , melancholy piano driven beats that wouldn’t work together as one track but played nicely off each other. In a way, they seemed to tell a story of a relationship falling apart. Kinda like the movie “Blue Valentine”. The first part was the euphoric feeling of being in love, the second was the middling part where you get comfortable and bored and the third part was the inevitable implosion. At least that’s how I saw it.
This one is also an example of my wet behind the ears sampling as the idea of sampling Dinah Washington is pretty fucking nuts, in the sense that it’s insanely well known. “There is no greater love” was a song I absolutely loved at the time and I really just wanted a way to incorporate it into my album. I found the key it fit in but it wouldn’t work if I played it one way. So, I arranged it so it was like three different voices. When the album dropped, I heard lots of complaints about chipmunking the voices cause, at the time, Kanye had already done that but, honestly, I had made this beats 5 years earlier. So, I figured, fuck it.

This is kinda my favorite of the series. It’s unassuming but it’s got a mood to it that just struck a chord with me. while the piano and bass may seem like the reason, I contend the drum brush sample is what makes this song.
When I initially made this beat (probably around 97) I was dating this girl and she wanted to sing on it. We even went as far to record the song but my engineering skills were simply not good enough to make it sound even remotely listenable. So, that song got scrapped and when it came time to make the album, I knew this would be a go to song for me.

Originally, this beat was sans bass line. I wanted to use it but it felt naked. Just some bare drums,pianos and a few sounds here and there. This is where I bought in my boy Damien Paris to save the day. I’ve written extensively about that recording session on this very blog so I’ll skip it here (just put his name in the search function if you’re curious about it). Regardless, that bass line completely made this song what it was.
This track was composed of samples 100% found in my moms cd collection. It’s all weird show tune/torch song type shit that I think I would never have even considered using had it not been right in front of me. I’d like to say where the piano is from but I’d get the life sued out of me. I did chop it up a ton though…so good luck figuring it out.

There was a time when Vast Air had claimed this beat to rap on but that never came to be. This was a track I liked a lot but didn’t feel like it fit into the album. It was the most aggressive song I made. The sample in the beginning saying “yo tone, play me some old pimp shit” is from Big Daddy Kane’s second album. Being that my name is Tony, I figured it would be a fun little thing to throw in. It’s as if Big Daddy Kane was in the studio with me. Just kidding. That woulda given this song a much better story though.

So, a lot of this album was made around 9/11. The mood may not sound like it but it was. At the time, I had tons of crazy middle eastern samples I was using and this song was an example. When I was working on this song I knew it had a particular feel to it. It sounded like some shit I’d hear at 24 hour falafel spot at 3 am. With that in mind, the fact 9/11 had happened 20 blocks from my house this song kinda took form, in my head, as some strange terrorist spy movie soundtrack. Like I could envision dudes hustling through caves by candlelight, in search of any sunlight peaking through the cracks. It’s funny cause, contrary to the album being called “Music by Cavelight” this song had nothing to do with that. That was more a play on my work process. I worked in my bedroom, which was (at least for half of the process of making this album) below ground and always dark. This song however, was literally just made to the idea of Bin Laden running though caves like a maniac. I swear, I had no agenda with it…it’s just what I saw when I listened to it.

Q-tip had his song “breath and Stop”, so the title was a play on that. I called it that cause this song was made up of two separate beats that kinda have a pause in them. They were both spacious tracks. This was also an example of my interest in southern bounce drums. I was listening to lots of southern shit in the late 90’s early 2000’s and that definitely rubbed off on me. As far as I know, not a lot of NYC producer were doing that back then.
This song also features live violins played by Baby Dayliner. He had gone to a performing arts high school (La Guardia) for Violin so i thought it would be cool to have some of that on this album. I think it was the first time he had dusted off his Violin in like a decade. It took a little time to knock the rust off but he definitely laid down a nice accompaniment to the track.

Chances are this is your favorite song on the album. I mean, it’s a guess but judging from peoples response, this is THE ONE. Funny thing is, this song almost didn’t make the the album. It was the last song I made. I had a finished album but Ninja Tune wanted one more song (cause we had taken off “Bullfight in Ireland” and “A new day” from the euro release). I had just made this beat and I knew i was sitting on something special. This is one of those rare beats I can distinctly remember making. Just how all the parts kinda melded together was amazing. Typically, when making a track, there would be tons of trial and error. I’d be looking for matching pieces and it could take forever to find the suitable sound. With this song, it was like everything I touched just synched up perfectly. Probably the most asked question i get is “What is the voice on this song saying?”. well…I have no idea. It was from some random country record, I sped it up and put a guitar amp effect on it. I did that because , whatever that voice was saying, didn’t make sense. So, instead, I opted to use it as an instrument. It certainly strikes that chord.
People often ask me if this is about my insomniac and I don’t really have an answer. It’s hard to personalize these vocal-less songs made up of samples. While I’ve certainly had my issues sleeping over the years, this song was named “Insomniac olympics” cause it just flowed in a way that reminded me of what it’s not like to sleep does. The olympics part is a play on the opening horns. Often mistaken for olympic horns or the classical song “Fanfare for the common man”

It’s not from either of those things.
At first I tried to get Aesop to use it but he wasn’t into it. I think he was between albums anyway so he wasn’t making many new songs. When Ninja asked me for one more track, I knew this would be the one.
I also think this song is the main reason I’ve gotten compared to DJ Shadow my entire career. I can see why. It wasn’t intentional but the drums and piano did have a shadow-esque quality to them.
Anyway, I sent this one in to Ninja Tune and they loved it. It became the single and the lead off track on the euro release. I believe it was the last track on the US release and that’s as I had intended it. In my eyes, it was a closing track. 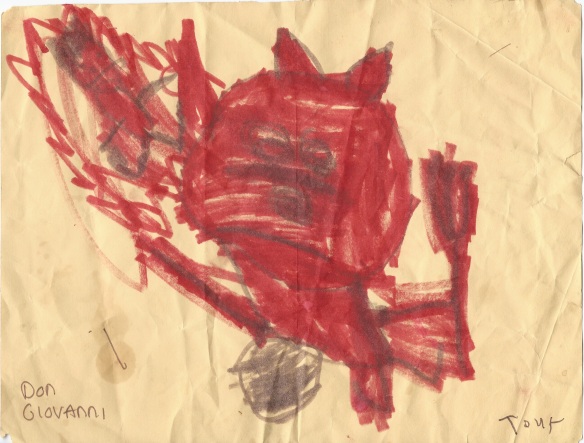 If you actually own a copy of this album, this picture may look familiar to you. It’s on the CD. This is a picture I drew when I was 3 or 4 years old. It was my version of Don Giovani, from the opera. At the time, I had a baby sitter who was an opera singer and she would play this opera for me all the time. I loved it. So, I went to school and drew this. Upon seeing it, my teachers freaked out and had me go see a shrink. After all, what 4 year old kid draws a fiery devil casting some poor dude into hell? I do. Now, this was a long time ago and I have no recollection of it but I’m pretty sure I was just a fan of the opera. I don’t have any memory of that opera now but I’ll just assume there was some sort of bad guy who did some bad things in it and I was just portraying that.
Whatever the case, I fucking love this picture and wanted to incorporate it into this album in some fashion.

34 thoughts on “The Making of “Music by Cavelight” Part two”