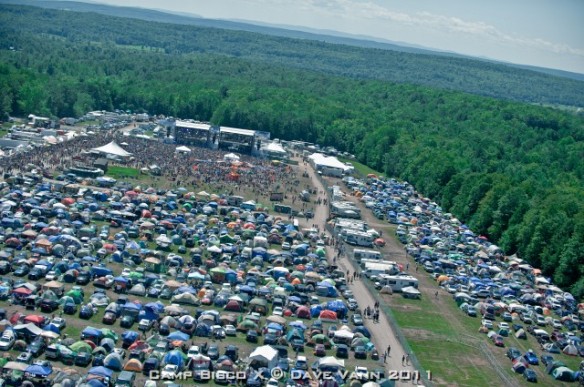 I don’t know how it happened, but at some point in my music career, I became a guy who plays festivals. While this may bring huge events like Coachella and Bonnaroo to mind, I’m not talking about that. Those are huge, genre blending events that bring some of the biggest musical acts from all over the world to play in front of hundreds of thousands of people (That number could be wrong but I feel like it’s close enough).

No, the type of festivals I’ve played are smaller and far more “niche”. They vacillate between being electro-hippie jam bands type of parties to more on the drugged out dub step side of things. This is funny to me, as I make music that is nothing like either of those genres but, hey, they ask me to go and pay me, so I go. And. to be honest, they’re usually fun. I’ve written about these things multiple time on this blog. Here , here and , to a lesser extent, here. Yes, I complain and make fun of them but, in all honesty, they usually aren’t THAT bad. I’m simply not their target audience.
This past weekend, i attended Camp Bisco for the first time. It’s a huge north eastern festival thrown by the band The Disco Biscuits. This year, acts such as Skrillex, Atmosphere, Amon Tobin, Big Boi from outkast and about a billion others were all playing. I was performing in the Ninja Tune tent. Prior to going to this festival, I had been warned by people I know that this one is the “craziest”. Now, to me, this meant it was just the most deeply filthy and hippied out. At least that’s what I assumed. I mean, how crazy could these things get?
My friend Claudia and I drove upstate to the grounds really not knowing what we were getting into. The warnings had kinda shook me a little into thinking this wasn’t just you’re typical hippie/jam/electro/dubstep festival and something more sinister.
As we arrived, I realized this was WAY bigger than any other festival I had ever played at. I’m guess there were about 10-40,000 people there…or more. I have no fucking clue…but it was a shit ton. Contrary to my warnings, I found this festival to be, not only the most well organized and artist friendly, but also the most diverse as far as the people who went. Sure, it was packed to the gills with people in rainbow tutu’s and furry boots on and endless hula hoops…but there were also some fairly normal looking people. Anyway…I can honestly say it was the best experience i’ve had at one of these things by far. But, instead of bore you with the minutia of my time there, I figured I’d just let these photo’s speak for me (with a few comments thrown in for good measure). The majority of these were taken by Claudia Santiso with a few thrown in by me. Now, enter Camp Bisco: 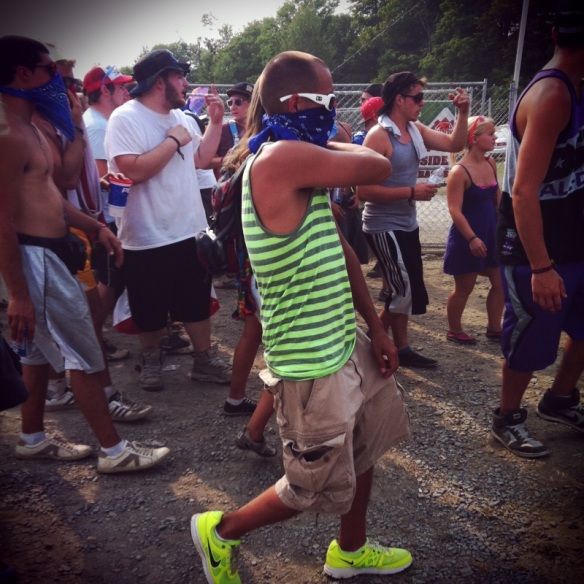 It was dusty as fuck. Tons of people were walking about with handkerchiefs tied to their face like it was the apocalypse. Personally, I didn’t think it was that bad…so these people are kinda pussies. 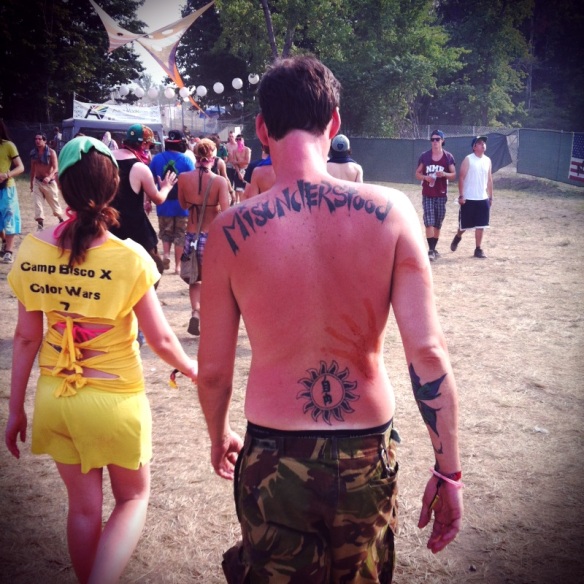 Lots of hilarious Tattoo’s there but, without question, the winner goes to your man who got “MISUNDERSTOOD” written on his back. That’s gonna look awesome in 30 years.

I don’t know what this dude is the king of, but it certainly isn’t “pussy getting”. 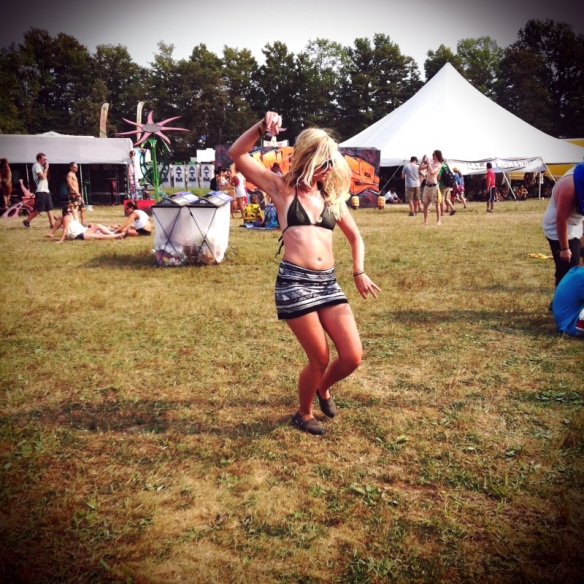 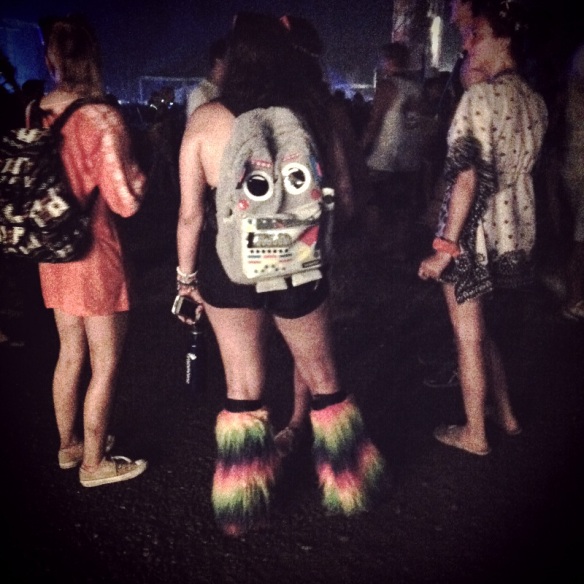 The three elements of festival ladies: Hula hoops, dancing while tripping and furry boots. The fourth element, Glow sticks, was unfortunately not captured.

Sure, it was 90 degrees out…but when is a daytime field stripper not the right choice? NEVER O’CLOCK. Those two huge things in the background were the main stages. They were enormous. 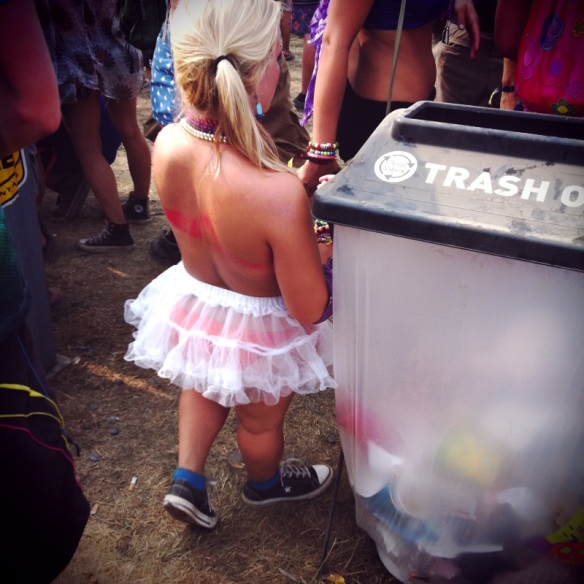 Claudia caught this one. It’s like a four leaf clover covered in rabbit tails. Oh, she was topless too. Props to her for winning the “I give a least amount of fucks” award.
Oh, bt, if you’re confused, this is a little person, not a naked child. Just to be clear.

Here’s me hiding in the magical cut out forrest. I bet, if I were tripping, I’d be losing my shit in there.

Other usual suspects include:

Here’s a blurry one of me and guy dressed like a hot dog. Keep in mind, it was 90 fucking degrees out.

There’s a war going on, no one is safe from…

Me Enjoying my first fried Oreo. I ate 4 of them. I wanted to die soon after that. 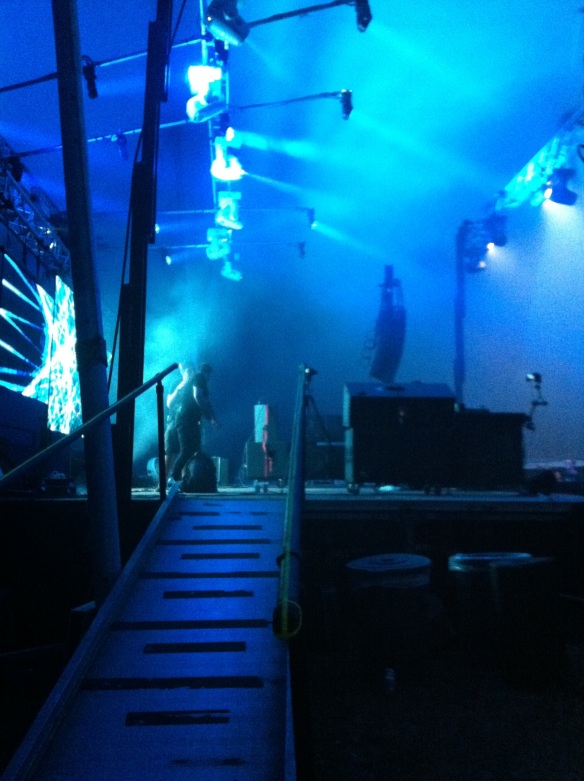 The stairway up to where I performed AKA the stairway to heaven, bro.

And, finally, a picture I took on stage of the crowd. Talk about putting your hands up…Good times. 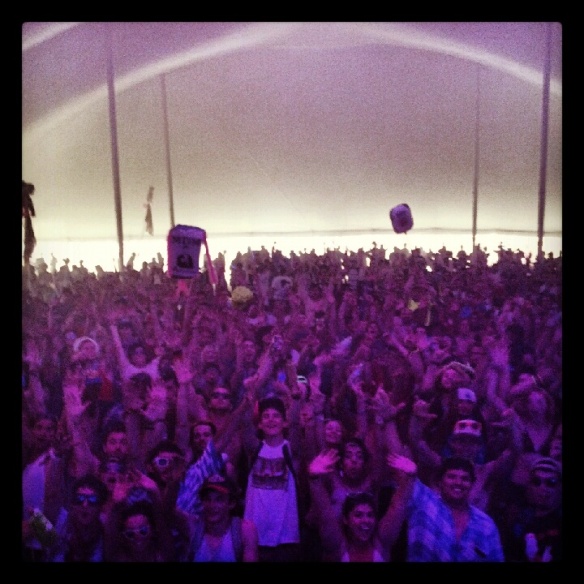