(none of these women above are included in this post)

In honor of valentines day, I thought I’d celebrate some of my favorite ladies of all time. The ladies that helped shape my young mind into what it is today (for better of worse, I suppose). Now, some of these may really show how old I am but these 15 were all girls who, at some point in my maturation process, that had an impact on me. I’d say the love of these women ranges from me being between 11 and 19. So, you know, they’re pretty fucking important. Let’s take a look at my top 15 ladies of yore (in no specific order)

She was the first famous person I can clearly remember being obsessed with. I was too young to recall her swimsuit issue but in “national Lampoon’s vacation” she changed the game for me. She also is the only girl ever featured in my only wet dream ever. (mom, stop reading here). I was in 6th grade and dreamt I was having sex with Christie Brinkley. Thing is, I was on a bed in the middle of a stadium with a crowd of cheering fans. They would applaud at certain moves. It was fucking bizarre. Dunno what that means but I’m happy to report I never became someone who desires a crowd during sex.

I still contend that young Phoebe Cates is one of the hottest women ever. I mean, the scene in “Fast times” alone changed the life of every adolescent boy who saw it Granted, she never was that hot again but I still feel like she remains a mold for what I find attractive in girls faces to this very day.

While everyone was clamoring over Tiffani Amber Thiessen (who was also hot), I always had a thing for Lisa Turtle. The fact that her character on “Saved by the bell” was a spoiled cunt really never dissuaded me from liking her the most. Liking her was the one thing Screech ever did right. 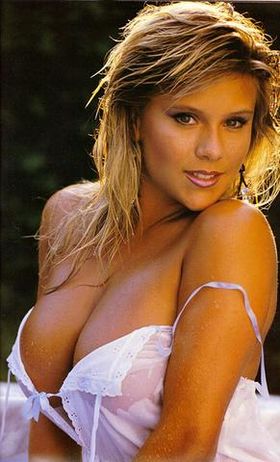 Now, this one is obvious. Tits. I feel like back in the day, tits of her caliber were not as prevalent. Sure, there were plenty of big tits out there but few pop singers who let them fly like Samantha Fox. I knew like 3 dudes who had Samantha Fox posters on the wall and it’s crazy to think what their parents must have thought. I mean, we were like 12 with a huge poster of a sweating, huge titted prostitute on our walls right next to the one of Bo Jackson.
It’s funny to look at her now cause, truth be told, she’s kinda gross. I mean, I’d still hit it (duh) but she certainly has an air of “bar whore” to her.

On the Cosby show, Bonet was so pretty that it almost made her non-sexual. She also dressed like charlie Chaplin, so that didn’t help. Then she did the movie “Angel Heart” and , all of a sudden, she was a next level kinky girl who couldn’t get off unless she was being doused in chicken blood. I suppose my mind settled somewhere between those two extremes and found solace in her being neither a weird virgin or a voodoo prostitute.

This one was personal and very specific. Drew’s window of being hot, in my eyes, was a brief and intense one. The mid 90’s to be exact. Whenever this picture was taken. I don’t know what it is but it got me. It didn’t hurt that she lived in my neighborhood and saw her all the time on the street. For the record, she is WAY cuter in person (even to this day) than she is on screen. But, yeah, she’s one I seriously loved. A lot of these other girls I’m mentioning here were simply “hot” to me. But , at that precious age of 18? I felt like she was my soul mate.
PS. We should be together soon

Rosie set off something very specific in me. No, it wasn’t just her awesome big tits. She reminded me of girls I loved in high school who wouldn’t fuck me in a million years. Basically, all the hot puerto rican girls who wouldn’t give a white boy the time of day. I’m pretty sure if you ask any white dude who grew up in NYC during the 80’s and 90’s, they know exactly what I’m talking about.

She was an early one. That face. Jesus…that perfect little surfer girl face. It’s too bad she got older, started chilling with Corey Feldman and Corey Haim and began to look like a blown out stripper.

This one is fairly obvious. All dudes love Milano. I honestly didn’t even give her a glance when she was on “Who’s the boss” cause she was a kid (even though i think we were about the same age at the time) but when “Teen Steam” , a work out video for budding adults, came out? forget about it. She had every young dude sitting funny and she even upped the ante by not giving a fuck about getting naked in movies. how cool of her was that?

When I was 12, my dad gave a subscription to playboy magazine. He was an artist and felt the human body was blah blah blah (really, he just used me as an excuse to get playboy for himself). Jenny McCarthy was a super star of playboy. She had what most would consider the perfect 90’s body. Then she got on TV and it turned out she was actually kinda funny. Her short lived sketch comedy show on MTV was way better than it had any right being…AND she was hot. Her only downside was her slight chicago accent that makes even the hottest girl sound like she works at sausage factory. 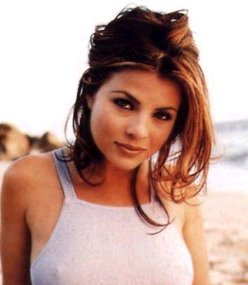 She was a “Baywatch” sleeper. That show had so many hot yet plastic looking women (shout out to Pamela anderson who simply didn’t make the list due to overexposure at such a young age). The thing about Bleeth that made her stand out was that she was a brunette. I feel like I started out loving blondes then, as I got older, I started preferring darker haired girls. I’d like to think Bleeth had something to do with that. 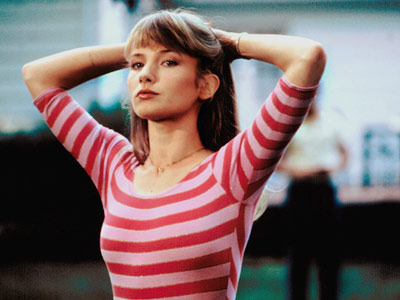 Another early one. She had a dead eyed coldness to her that really turned me on as a youth. Much like Rosie Perez reminding me of girls i could never get, De Mornay was similar. But instead of Puerto ricans, she reminded me of rich upper east side girls who smelled great and who only dated dudes in chinos (that was once a thing…). To this day, I still resent those girls but mostly cause, even after i broke the seal and met them, they still were pretty awful people.

Of this list, she may be the prettiest girl of all. She came along when I was older and my taste was more refined. I remember seeing her video for “Torn” and not even realizing how hot she was. But I found myself just watching it intently every time it would be on. Then it all hit me…”oooohhhh…this girl is stunningly beautiful and everything I desire! durrrrr…”. I have no clue what happened to her but, goddamn, look at that face.

For many people, the music of “Purple Rain” was a life changing experience. For me, Vanity was the one who changed the game. She opened my eyes to what is currently my favorite type of girl: brownish girls of non-descript/mixed race with insanely hot faces. I mean, I didn’t even know that was a thing when I first laid eyes on her but, I’ll be damned if it doesn’t resonate to this very day. Really, Prince’s hit list is one of the greatest collection of hot women ever seen by man. If i were really on some boss shit, every choice concerning ladies would come down to “What would prince do?”. Fortunately , I’m no boss so that’s neither here nor there.