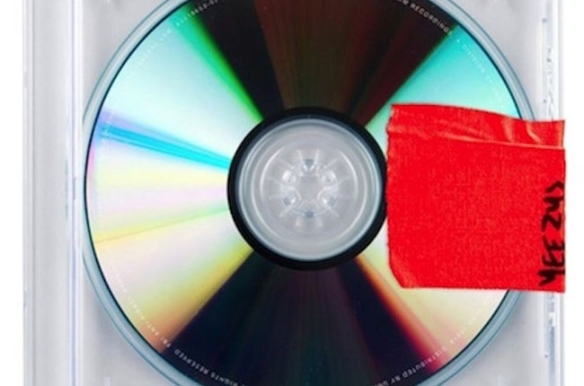 I’m only doing this cause of multiple requests I’ve gotten to do so. Clearly, people wanna see me go on a tirade about what a piece of shit Kanye is, yadda yadda yadda…well…That’s not gonna happen. But, I’m also not pitchfork.com so I won’t be doing any sword swallowing either. I could sum up a review of this album in a paragraph but a song by song breakdown seems more fitting. Before I even get into it, I wanna say that people, on both sides of this argument, are absurd. The extreme love and hate this album has gotten is concerning cause it’s as if no one is capable of simply thinking something is “okay” anymore. I understand this album is highly divisive and the internet (or music journalism) is highly reactionary but…jesus christ. People need to get it together. if you’re either getting angry at this album or masturbating to it, you’re a fucking ridiculous person.
On the pro side, it’s an out there pop rap record by one of the worlds hugest stars that isn’t pop at all. It barely has drums on it. On the con side, a large portion of it isn’t exactly enjoyable to listen to. unless you’re a goth who likes to go to ibiza, in which case this album will be a life changing experience.
But, before I get into my thoughts, I wanna know what you think?
Ye or Nay (SEE WHAT I DID THERE?!?!?!?!).

Now that you’ve voted, here’s my take on it…
Keep in mind, I’m not a music critic. Just a guy who listened to this album a few times. An album, I might add, that I sure as hell could never make if I tried. So, please read this from the perspective of a fan and not a fellow artist. What I’m trying to say is there are no “I’m an artist too!” sour grapes going on over here. Just a guy listening to an album by another guy. I should also add that i actually kinda like Kanye as a rapper. People give him shit but he’s pretty entertaining to me.
Also, there’s a good chance a lot of these youtube clips will be nixed soon or already are so my apologies for that if it happens. Luckily, google exists and , if you really need to listen along, it’s not impossible.

On the albums opener, Kanye sets the stage with was can best be described at a “Valiant attempt at something”. I’m not really a guy who gets too deeply involved with caring about obscure sub-genres and the songs that reference them so this just sounds like some electro shit to me. I’m sure sure whoever made the beat (It wasn’t Kanye, it was Daft Punk and like 7 other people) could site all sorts of inspirations for this track but , to me, it’s a just sort of grating. It’s also where we see the formula for this album begin. That Formula being Kanye rapping like Kanye (Which , like I said, I actually enjoy) over beats that are not typical to hip hop. Stuff like this will both give you a 9.5 on Pitchfork as well make many fans of your older work hit the “skip” button.

Major props to Kanye to being the first rapper to really Utilize the drums from Gary Glitter’s “Rock and roll anthem part 2”. Lord knows that child molester needed some shine.

This song is one that is simply not for me but I get it. I have no interest in listening to this shit ever again but it serves it’s purpose. It’s one of the more “out there” songs while also being the most commercial joint on the album. That’s actually quite a feat if you think about it. It’s the one most critics will point to when they justify how much they suck off this album. To me, it’s like if Outkast’s “Hey ya” was made by someone is a really shitty mood.

I gotta say. He does sound hungry on some of these tracks. He’s always been an emotional rapper who kinda got over more on his attitude than his content. This is no different. Sure, calling a song “I am a god” is baiting people and trolling but, outside of the title, he’s not exactly saying anything he hasn’t said before on each of his albums prior to this.
Also, of all the ibiza goth themes on this album, this track was a drum track away from being the game changer…of ibiza goth theme songs.

I like this joint. Maybe cause it’s first song on the album doesn’t sound like it’s trying too hard to be cutting edge. Again, Kanye has been talking about this same topic since his first album. That said, he’s kinda good at it.
I’m curious if Kanye is riding the “No drums” wave that has been popular in some hip hop corners for a while now. Whatever the case, I gotta hand it to him for making so many songs that could have a chance to ever get run on the radio or MTV. It’s bold. However, I’m not a person that equates boldness and genius. That’s a whole other discussion.

I feel like “New slaves” is where this album takes a turn. He stock piled all the “heady” weird songs up front. . Then he stacked the middle with his emotional joints. I fuck with this song. Definitely my favorite beat on the whole album. I even like the auto tunes Chief Keef part. That surprised even me.

I think I’ve reached the point where i no longer need to hear sex themes from rappers not named “Necro” ever again. I get it…you eat ass. Good for you, bro. You also fucked the worlds most vapid cunt and put a baby in her so, clearly, you’re kind of a moron.
These kinda songs just always just seem like thinly veiled self promotion for how much you put it down in bedroom. Hearing Kanye say “Wet mouth” makes me kinda want to vomit but then he cracks me up where he says “Put my fist in her like civil rights sign”. Still…Fuck this song. I’m not even mad at it…I’m just more rolling my eyes at it.

Blood on the Leaves:

Oh cool! It’s like Kanye doing a duet with Nina Simone! The streets have been waiting!
Here’s a concept: You’re Kanye. It’s 2013. You’re regarded as one of the most forward thinking producers/musicians in modern pop music. how bout you fall back on the auto-tune? If you can’t hit the notes, get someone who can to sing it. You know Frank Ocean. Get him to sing that shit. It’s not like people would question your artistic integrity. You can still drop your verse at the end so it’s technically your song. Just saying.
This song has a dope beat though. No question about it. But it’s yet another case of the heavy and somber feel of a song not matching the depth of the lyrics. This has the makings of something far weightier than him rapping about a divorce. But that’s the thing..Kanye isn’t deep. Sorry. he isn’t. I’ll be the first to say he’s far more clever than people give him credit but deep? Nah, b.

I don’t wanna keep harping on this auto-tune shit but…goddamnit.
This is “heartbreaks and 808’s” outtake business right here. It’s again him “rapping” over production that isn’t typical to hip hop. But that’s the whole album. I dunno. This joint is just kinda boring. It might work at like 5 am though. But, AGAIN, what the fuck is he babbling about on this track? “Let me goooooooo…” is the “Do I make you Horny?Yeahhhh baby” of played out R&B catch phrases.

This song kinda exemplifies my biggest issue with the album. It’s a bunch of songs trying something different (in the realm of popular hip hop), which is applaudable but the results are kinda thin , synth-y joints with not much to say. It’s not like they’re even an enjoyable listen. A lot of them sounds like unfinished Nine Inch Nails demos with rapping on them.

This will be every old rap heads favorite song by far. Why? Cause he’s rapping over a soul sample and not dark , drumless synths. It’s as if he tagged this on the end to make all his old fans who aren’t music critics happy. Well, it worked! Say what you will but you can drain more emotive qualities out of an old soul loop than dark synths over a thumping kick.
And, to take it further,Kanye simply sounds better over these types of beats They fit his silliness. He’s simply not a serious enough rapper to pull off these dark brooding songs. He’s way more in his lane when he’s just fucking around over soul loops. Still, all that said, this song does seem like him stepping backwards. But I’m sure a lot of people would have prefered that in the first place.

20 thoughts on “Yay or Nay? This Yeezus album”