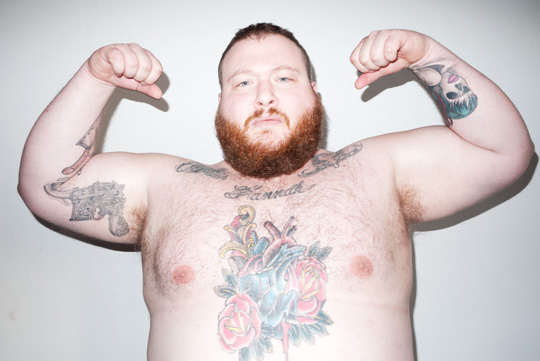 I went to a stand up comedy show this week. It was fun but, as it sometimes tends to happen, there were a few girls in the front row who felt it was there duty to chime in throughout the whole show. They weren’t even heckling. They were just answering Rhetorical questions and saying shit like “Oh my god, my friend totally does that to!” in the middle of jokes. unacceptable. Seeing this got me thinking about how some people are just wired to be entitled assholes when going to see people perform. I’ve certainly had it happen to me. Someone walks on stage while I’m playing to literally chat with me like I was sitting alone at a bar or to request I play something else…at a show I’m headlining. So, yeah, crowd participation has it’s limits.
This morning, I was treated to a video of Action Bronson taking justice into his own hands. Some dudes jumped on stage and this happened:

Personally, I loved this. Sure, the guy was harmless and just really excited but, at the same time, get off the stage, bro. So , I wanna know what you think…This weeks “Yay or Nay” is a little different. You’re not judging a song or an artist…you’re judging an action…by Action Bronson. So, what do you think?

26 thoughts on “Yay Or Nay: Action Bronson being his own Stage security”