Sup dewds,
I hope you all had a good weekend. Did you celebrate Pride weekend? Of did you sit alone in a room, reading the bible, staring at candles and cursing jesus for making gay people?
My neighbors had a huge backyard party in my buildings communal back area (pause?). At first I was annoyed that I was gonna have to listen to 6 hours of Lady GaGa songs but I ended up going back there for a drink with my girl and some friends and it was pretty awesome. I’ll tell you, gays know how to party. They also know how to drink which is why, two days later, I’m still kinda hungover.
Anyway, if you are a person with an inquisitive mind, send me questions…about anything…Email them to me at phatfriendblog@gmail.com or leave them in the comments below.
Okay….let’s go.

I know that as a fellow life long hip hop fan, the highs and lows come and go. Lots of people have and will always say that it’s best or the worst of times..
That being said,
Put yourself in a KILL BILL type a mindset.
5 of the wackest rappers to ever pick a mic have ambushed you on your wedding day, ruthlessly putting a 45 slug square in your mellon.
As you come out of your coma and plot your bloody designs revenge on these bitches, who would they be?!
(They would all have to be famous mofo’s and not just busters that suck. These are people that actually took a shit in the sanctum of hip hop just by trying to contribute to the cannon of it)

This question is very “young”.
As I’ve gotten older, I have cared way less about people who are wack at rapping. In fact, giving tons of thought time to rappers in general isn’t something I find myself doing as I get closer to 40 and further from 30. I’m simply not invested int he struggle anymore. That said, there will always be that little person in my head that’s been there since my teens that still cares a little bit. Over the years there have been a few people who jump out at me as just truly worthless rappers. The thing is, there are endless bad and mediocre mc’s out there. But, every now and then, someone will rise to the top and actually make my fairly disconnected heart beat a little faster out of pure disdain for their work. Keep in mind, I don’t know these guys…they could be awesome people…but fuck their music and their fans who make it worse by existing so they can continue to make music. These are the rappers/producers that, beyond just being bad (in my opinion), they also offend my sensibilities.
So, my list would go like such:
1)Pitbull
2)Dj Khaled
3)WIll I AM
4)Swizz Beats
5)Foxy Brown

Sure, I coulda put the Drakes and Lil Wayne’s of the world but, to be honest, they aren’t THAT bad. They can both rap well enough. I simply don’t like their music. This list though? Hacks. All of them. Yes, even Foxy Brown.

I hear a lot of hate and a little love for Beats by Dre Headphones. I figure if there’s anyone I can ask about beats, it’s you. What do you think of them? Are they shit? Are they a scam? Are they as good or even better than they claim?

I’ve never used them. I’m the worst person to ask about cool new tech things. Even something like headphones. I’m a guy who still doesn’t have flat screen tv’s in his crib and usually get’s the newest playstation 5 years after it’s been out.
I can say one thing about beats by dre, the people that wear them make me not want to ever even listen to them. The outlandish pricks I see on the train rocking them are enough to keep me rocking my bose earbuds until I die.

Is it okay in your opinion to, say, walk to the corner store in the open toed shoes? Walk your roommates dog because he never walks it and you feel bad but are too lazy to put shoes on for said act of walking the dog til it shits and you pick up the shit..in open toed shoes? Picture like gym shorts an excuse for a wearable shirt and said open toed shoes whether birkenstocks or plastic ‘thongs’…or in your neighborhood in a thriving metropolis is that just something you wouldn’t do?

Yeah. I guess so. I realize throwing on a pair of sneakers that cover your feet might take a whole other 5 seconds but I understand and relate to being lazy. It’s funny you bring this topic up cause I wrote a whole rant about how men in cities need to just stop wearing open toed shoes. I wrote it about a year ago. Randomly, last week, I started getting flooded with comments on this year old piece. It was all people who were wildly offended that I would ever say men shouldn’t wear open toed shoes. I’m assuming it was some “foot rights” message board/support group cause these people were fucking ridiculous. Not only were they furious about the article, they didn’t even read it for the most part and were just going off on the title. Admittedly, after like 15 of these comments and me responding in kind of trollish manner, I kinda lost my shit cause it was like yelling at a brick wall. A brick wall who probably can’t achieve orgasm unless you’re cumming on it’s feet. For more on this, read here:
https://phatfriend.com/2012/08/16/my-case-against-men-wearing-open-toed-shoes/
Shit gets heated in the comment section.

I know you like Earl Sweatshirt, but I was curious, have you listened to Tyler, The Creator’s newest album ‘WOLF’ or could you careless about Tyler?

I never listened to it. I don’t dislike Tyler I just kinda got uninterested in him. Both as a producer and a rapper. He just didn’t really evolve enough for my taste. At this point, I’ll check for Earl and Domo genesis out of that crew and no one else.

Hey block, people in the 70s laughed at the notion of having a remote control for the tv set. What’s your point of view about burger kings brand new whopper holder?

Had to google this one… 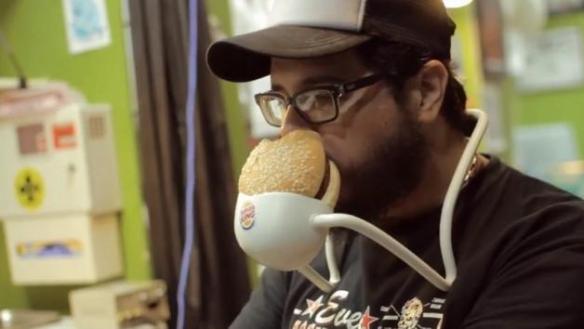 Jesus fucking christ. By comparing this to the remote control, you’re basically saying that, somewhere down the line, we will all be eating out of handless, neck troughs like retarded pigs. You might not be wrong. Lord knows using your hands to eat has long been a hassle for all of us who are so busy updating out tumblr pages, we don’t have time to pick up food.
It is fitting that a fast food company would find a way to make being a fat piece of lazy shit even fatter, shittier and lazier.

What are your thoughts on producers spending hundreds or thousands of dollars on hardware synthesizers instead of using virtual ones? I noticed that you don’t use a lot of synths in your music, why not?

Most producers are gear heads. That’s a good thing. So, when I hear about El-P buying his 25th synth, I get hyped cause I know he will use it to make good music. However, I’m not that dude. I’ve never been a gear head. Aside from literally not having room in my apartment for that shit (I live with a girl who works in a fashion so you can imagine where most of the space goes to), I simply have never been a guy who likes tons of equipment. I like to keep things very minimal. Partially cause I’m scared of change but also cause I like to know how to use what I work with. Beyond that, lots of those synths and keyboards just don’t really create sounds I want to rely on. I mean there are some amazing synths out there. In fact, if people gave me them, I’d be psyched. But the idea of spending a ton of money on a synth that has some great sounds is similar to me as spending a shit ton of money on a record cause it’s got a few dope samples. Sure, those samples can get used but , after that, it’s just one record you spent way too much money on. If I buy that synth, how many times can I use those sounds before everything I make sounds kinda the same? I think what I’m trying to say is that I’m cheap, lazy and have no room.

QUESTION,
What would you do if your blog died? (not hoping it will, I love it) but what if everyone just stopped commenting/sending questions. What would you do in it’s place? Is there something you would turn to? Another website?

I mean, if this shit dried up I’d just stop doing it. Otherwise, I’d become the blog version of someone twitter who has 3 followers but tweets constantly. It’s like screaming underwater.
If this did die, I wouldn’t bother retooling it and attempting to come back. I do this for fun and for free. If I ever had to change this into something that’s not exactly how I want it, then I’d just stop it all together. Besides, after doing this for almost 4 years now, I can safely say that I think I’ve covered about every fucking thought my brain could ever have. If people gave up on this blog, it would most likely be for a reason. But, yeah, don’t do that…cause I still like doing this.

From ALL the movies you’ve seen, Say you were given the choice of being in one. You could be which ever actor you wanted (you’d be in control of their body)
What movie would you wanna be in?
Who would you wanna be?
and Why?