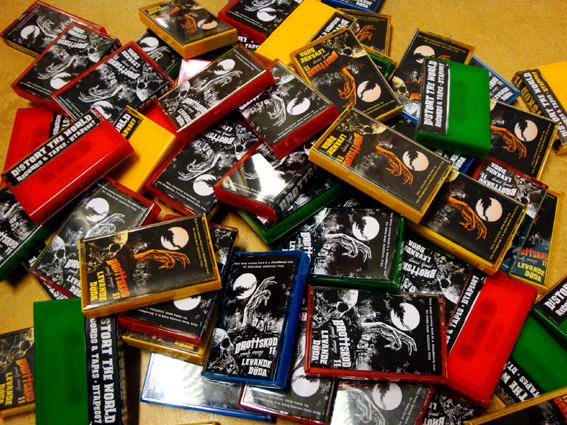 Whattup everyone…It’s the moment all the self loathers have been waiting for! I’m opening up the flood gates once again for demo submissions. If you have a song you’d like me to review, now if your time to both shine and possibly get shit on as well. However, before you just submit me something. There are rules. PLEASE READ THESE CLOSELY BEFORE SUBMITTING ANYTHING TO ME. They are crucial to your demo even making it to the review process.
1)The header on the email must say “Demo review”
2)If you’ve already submitted, DO NOT submit again. You had your fun now it’s other people’s turn.
3)Send me ONE SONG. Pick your song that is your favorite or the one that best exemplifies your music and shoot it over here. I’m not going to listen to your whole ep.
4)This time around, I’ll only be accepting songs that can be heard via a link. So, no loose mp3′s or myspace pages. I want soundcloud, bandcamp or you can even upload it to an upload site (like divshare.com, hulkshare ect…) that allows the songs to stream. Basically, the streaming part is crucial. If this is something you cannot do, you probably shouldn’t be sending me music in the first place.
5)Demo MUST contain original production. I don’t want mixtapes of you rapping over other peoples tracks. I want actual songs. I also would ask that you budding producers don’t just send me some random beat you made. I want a finished product. If your shit is called “Untitled beat” I will throw it right in the trash.

That’s about it for the rules. But there’s more…You must also accept that I will be reviewing your music honestly. I don’t know you. You aren’t my homeboy. I may write some shit you don’t wanna hear/accept. That’s fine and all but just know it’s possible. Butthurt responses will be clowned on properly. Trust me, I’m as familiar with internet criticism as any person who makes music for a living. It sucks but it’s part of the deal. After all, you’re sending me your music so I can review it. what else do you expect? By submitting, you’re pretty much agreeing to possibly being let down.
It should also be noted that , genre wise, I’m a rap guy. I like rap music. This can work both for and against you people sending me rap as I will be highly critical of it but there’s also a chance I might actually like it. Where as with other genres (particularly instrumental music and electronic type shit) I don’t really listen to that kinda stuff. Feel free to send it but just know my ceiling of enjoyment for that kind of music is typically pretty low. Ironic, I know…but it’s the reality of things.

Got it? good.
So, send away to my email
phatfriendblog@gmail.com.

As for this week, It’s business as usual. I fucked up and didn’t realize how low i was on submissions so there are less songs that usual. As always, the reviews are done in the form of brief write ups and 1-10 ratings in these categories:
Production
Vocals
Listenability
Originality

So, let the good times roll!

This song sounds like it would have been an indie 12” banger in the late 90’s. I like the initial beat but the change up midway doesn’t really work for me. The first rapper is decent. Good voice and flow but , content wise, isn’t really saying much. The second dude sounds kinda nervous. I dunno if that’s just his style but there is a palpable discomfort on the mic when I hear it. He’s not off beat or anything…it just doesn’t sound natural. Regardless, it’s a well put together song that just lacks any aspect that makes it an above average typical underground rap song.
Production: 5 out of 10
Vocals:4.5 out of 10
Listenability:4.5 out of 10
Originality:4 out of 10

Artist:Broken rope
Song: Comb the blades out
https://soundcloud.com/brycebeverlinii/comb-the-blades-out?in=brycebeverlinii/sets/mindset
Way to disable embedding on your soundcloud page, guy!
Anyway…I like this beat. It’s weird in a good way and has a controlled chaos to it that works for me. The rapper also has a controlled chaos to him but it doesn’t translate as well. He hits some nice flows at times but also gets a little sloppy at others. I have a feeling those moments are on purpose though and they simply just don’t work for me. Also, he does have a tendency to make corny decisions. The singing, for instance, is a problem. And some of the vocal inflections during the rapping made him sound like a rapping weatherman. That said, he can certainly rap very well and I’m just nitpicking.
Production: 5.5 out of 10
Vocals:5 out of 10
Listenability:5 out of 10
Originality:5.5 out of 10

There should be a genre called “Aggressive hotel lobby music-step”. It wouldn’t be actually aggressive but it would need that title to separate it from being called “Elevator music in europe”, which is a step down in it’s intenseness. If such a genre existed, this song would be a hit within said genre. Clearly, this kind song is not really in my wheelhouse. However, it is well made for what it is so I can’t really be that mad at it. I’m just not the right audience for it…I have never worn a beret and I certainly don’t frequent cafes with any regularity.
Production: 5 out of 10
Vocals:n/a
Listenability:4 out of 10
Originality:3.5 out of 10

Normally, a song titled “Beat # 5” would get thrown in the trash quick. But because I unexpectedly ran out of demos to review this week, I gave it a chance. Well, it turns out this beat is actually more like a real song than I would have guessed. Dope loops, dope drums with a decent amount of changes through out the song. My only critique of it would be that, if all the parts are sampled from the same song, it’s kinda bullshit on a creative level. But I don’t know that to be true of false so all I can go on is that the shit sounded good in general.I’m sure one of you readers will let me know, in which case, just knock 3 points of every score I give below.
Production: 5.5 out of 10
Vocals:n/a
Listenability:6 out of 10
Originality:3 out of 10

The drums are cool and the samples are cool. I just don’t know if one sample being filtered differently for a minute that arbitrarily changing into a totally different beat that has no connection to the initial part works as a “song” for me. I mean, all the parts on their own are nice but it just doesn’t translate well into a finished piece. It’s well made but needs some focus.
Production: 4.5 out of 10
Vocals:n/a
Listenability:4 out of 10
Originality:4 out of 10

This is another one of those “Where have I heard this before?” kinda moments. That sample…it’s very familiar. I’m sure some of you out there have answers.
Anyway, it’s a cool loop. The drums are kinda wack. Improving those would help this song greatly cause it’s very strong otherwise. The rapping is actually pretty dope. Well above average by “demo reviews” standards. While neither of the dudes are reinventing the wheel they just sound comfortable on the track. I can’t stress how important that can be when differentiating between someone who’s good and someone who’s just serviceable.
Production: 4 out of 10
Vocals:6 out of 10
Listenability:6 out of 10
Originality:3 out of 10

This is what i like to call good intention rap. It’s seemingly influenced by Atmosphere and the early 2000 indie rap boom I was very much involved in. It’s got a message to it and an artistry that’s undeniable. My issue is that it bores the shit out of me. It’s simply a type of rapping I don’t have much interest in anymore BUT this is also something lots of people who aren’t me can relate to deeply So, it’s not a knock on them as much as a personal preference.
As for the song itself, the beat is okay. Very Atmosphere-ish. The rapper is okay. I don’t love his voice or his flow but he’s capable.
Production: 4.5 out of 10
Vocals:4 out of 10
Listenability:4 out of 10
Originality:4 out of 10

Now, you tell me what you think!