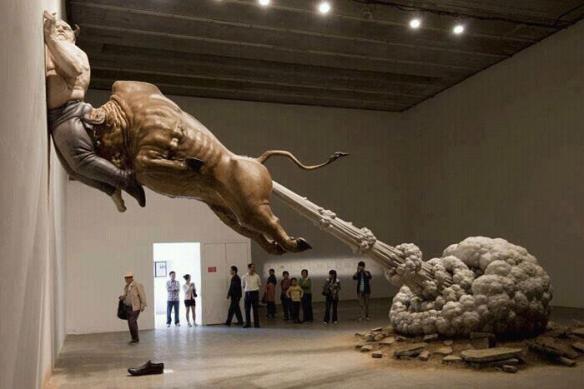 Even though I grew up surrounded by fine art, I admittedly don’t really know anything about it or understand it very well. My dad was an artist and I attended all sorts of art related events from a young age. I worked in galleries. I’ve met countless artists who are both respected and successful only to forget their names the moment they walk away. Perhaps it was my own form of youthful rebellion to simply not give a fuck about it. Or maybe I took the parts I like from it (the creativity, the lifestyle of freedom, the “anything goes” mindset in terms of careers) and ignored the other parts that didn’t make sense to me. Truth be told, I honestly never got too into fine art cause I was simply not good at it. I couldn’t draw. I couldn’t paint. My sculptures looked like petrified shit slabs. In fact, you should see my handwriting. It’s as if I do it while riding a horse. So, read this with that in mind. While I am technically an “artist” in the sense that people who make music are artists, I’m not an artist like the people I’m talking about here. I’d also like to clarify that, while it may seem like I’m shitting all over artists and art in general, I’m not. They do something I cannot do. From Bob Ross to the worlds most renowned painter, I can’t do that shit so it’s all equally impressive to me (and also kinda boring as well but, hey, that’s just how I see it). The bottom line is, this is all coming from a humble place and a guy who admittedly less talented than most people.

Over the years there have been many types of art that I scoff at. Like some dude who built a waterfall and called it art (nah b, you’re not an artist, you’re a landscaper) or that thing that people did in central park in 2005 with “The gates”. Maybe it’s just me but turning central park into a croquet course for lazy giants just didn’t work as “art”. I understand that art is everything. But I take issue when people just kinda do some random bullshit and act like they’re changing the game. It’s the equivalent of when David Blaine stops doing card tricks and starts calling “watch me not drink water for a month!” a magic trick. It’s just not the same thing.

You take that and add in the concept of “Performance art” and the lines get even more blurred. With performance art, you can literally do anything and it’s accepted. Sometimes I wonder why more people don’t just do that…literally anything…and give it a faux deep/politically charged name. The beauty of art is that you can spin it anyway you want. The ugliness of that same facet is that it leaves the door open for endless bullshit and fakery. I could do an art show where I line up five homeless dudes, light them on fire and pissed out the flames. I could call it “Giuliani” and I would be a genius. I’m just saying, the line between brilliant and absolute crap in that world is microscopically thin.
Last week, Jay-z did a performance art piece in a NYC Gallery (I’m literally too indifferent to google which gallery).

What he did was rap his song “Picasso baby” for 6 hours straight. While this is a feat of endurance (I’d imagine David Blaine is a little salty he didn’t think of it first), watching the video I couldn’t help but feel like I’ve seen it before. Oh wait…his performance art piece was basically like every overbooked, crappy underground rap show I’ve ever seen except:
1)In a well lit room
2)Only one rapper who won’t shut the fuck up, as opposed to 30.
3)lots of old white people
4)people looked genuinely happy
5)It probably had good sound

It got me thinking, man what if that was the point of Jay’s Performance piece? A biting commentary on shitty underground basement ass rap shows. Clearly, it isn’t. But it could be and that would have had way more depth than whatever bullshit explanation he actually has for this.

The thing is, I’m not even mad at Jay. I think his new album is pretty good for a 42 year old who doesn’t really have anything to say or prove. I’m a long time fan. He certainly takes risks, albeit very calculated ones. This was just another thing that jumped out and reminded me how comically corny and pleased with themselves the entire art world is. And that goes out to all forms of art. From a painter who uses tampon blood to the movie star explaining why this action movie is better than the other action movies to the Dj who acts like he’s a genius cause he has the hang of Serrato and happens to play whatever music is popular with teenaged girls. It’s all under the same umbrella and it’s all bullshit.
This isn’t to say there aren’t real artists under that umbrella. Obviously, if there weren’t , none of us would be talking about this. There are those who inspire and make all this worth it. Jay-Z has been that artist for me in the past. Not so much lately but I can’t really knock a man who’s so rich and bored he doesn’t know what to do with himself. After all, that’s goal right? Getting to the point where you can do whatever you want cause no one can say shit to you at the end of the day. Well, that and personal and spiritual fulfillment, whatever that may be.

I think for his next trick, Jay-z should take 10 of the most revered paintings ever and copy them but with crayons. I’m joking but, seriously,I’d probably buy one if I could afford it. Jay-Z’s “The scream” Would be fucking hilarious.