Hey there. Man, what a super bowl! It was like…you know…really good wings. Some chili too. The super bowl is delicious.
Anyway, this is that thing where you send me questions about anything and I answer them. The sillier or more zany, the better. If you would like to join the fun, please do!
Send me questions to phatfriendblog@gmail.com or leave them in the comment section below. Be creative. I’m on volume 172 , so you can imagine that a lot has been covered.
So, without further ado, let’s get in to this weeks batch…

Often times when I see rappers have beefs, it feels like they’re just starting shit just to start shit. Given that you’ve been at a much closer proximity to hip-hop over your life and have probably seen these beefs unfold, what do you think is the main reason rappers get pissy at each other?

I’d venture to say there are 4 main types of beefs in rap.
1)Real beef
This is where some shit goes down that’s personal and the two people actually don’t like each other. It may result in a song about a person but it , more than likely, will lead to some subliminal disses and actual violence. I feel like people with actual “I hate this motherfucker” levels of beef don’t even always bother keeping it on record cause it’s too real. Like Tupac fucking biggies wife…that’s real.

Biggie wouldn’t even make a diss song about him. But, in general, most of the beefs in this category are unknown to the general public.
2)Fake beef
This is like what Kanye and 50 cent had a while back. It was 100% done for promotional reasons and meant nothing. Even something like the Nas/Jay-z beef , which got pretty real at times, could be classified as this cause, in the end, they ended up being buddies and it helped both of their national exposure.

3)Subtle disses that turn into endless back and forths
This is when, yes, a guy disses another guy. It’s maybe one line and he only does it cause he doesn’t care. Like when 3rd Bass dissed vanilla ice or Tim Dog dissed everyone on earth. It’s more the shot gun method of dissing cause it’s not meant to really land in one place. It leads to response track after response track but it’s never that serious.
4)Perceived beef
This makes up about 95% of beefs in rap. some dude says something on a song, another dude things it’s about him, gets offended and makes an answer track. Like all the morons who got mad at Kendrick lamar for “dissing ny” when , in reality, anyone with half a brain could clearly see that’s not what he meant.

If you reach a point where you have to get a job to support yourself and there’s quite literally 0 demand for your music, will you continue to make it?

To put it another way: could you ever stop? Would you do it just to do it?

I ask because some artists talk about how it’s just what they do and they could never stop the flow of creativity… but you’re all about demystifying all that stuff, so seeing a more down-to-earth explanation as to why you’d do it otherwise (if you would at all) would be neat.

Hmm…that’s tough. I’ve been making music so long now with the expectation of people hearing it when I’m done that I don’t know if i’d be inspired to keep going if I was doing it for no one. I mean, I’ve been doing this for 20 years now. The first 5 or 6 years were the years I made music for very few ears to hear. But I was also learning how to do it so the process was so different.
I feel like, if that time comes, I’d probably take a lot of time off, miss it and come back to it down the line. But, even then, I’d be way less prolific. I’m driven by reason. Without a reason to create it, I can’t see the fire burning that long. It would be like 50 year old dads who are still chasing the dream of being in that rock band by playing in their garage with a bunch of other dads. At some point, you gotta just accept reality and move on from your unfulfilled dreams. Thing is, I’m the type of person who needs some sort of creative outlet. If it’s not music, it’s writing, if it’s not writing, it’s…I have no idea. But, regardless, no matter what place I’m at in life, I’ll need that. So , I’d imagine, unless making music got taken over by some other obsession, I’d have to still do it on some level.

Have you given much thought to the whole life on MARS thing? 24 in total will be on the mission, I believe. (Sorry if this subject has become overkill by the time you answer it!) Spout off on any opinions that come to mind…for ideas only – what kind of person
signs up for something like this? Do you think a lot of ppl will pull out at the last minute? If
they survive upon arrival, do you think the social dynamics of the whole thing will be like survivor/real world times a billion? etc.

Funny you should ask cause I’ve literally never given life on mars even the most fleeting , passing thought. It’s one of those “Lemme know when it’s a reality” type things. until then, it’s just an idea and one that could not matter less to me.
As for what kind of person would sign up for that? I dunno…an adventurous person , who loves science/space and has no friends or family they care enough about to stay on earth for. You know, a real Sandra Bulluck in “Gravity” type.
If this ever does happen, I’d imagine the entire purpose of such a trip would to be eventually create a reality show based on it. I’m sure it would start with actual astronauts but that would get boring quickly. They’d have to ramp it up. Real World:Mars might be a good start. Take 7 drunken assholes with emotional problems and put them in zero gravity. Eventually, down the line, we might get “The real space wives of Mars”. That’s an alternate title cause I don’t think “Spoiled, entitled cunts in space” would fly over at Bravo.

Did you think the butt cleavage short-shorts trend was excessive this past summer? As a guy (I’m a girl) were you down with it as long as the girls looked good in them or did it make you feel slightly old and uncomfortable, as it did for me? Just trying to think outside the frigid winter box here!

Butt cleavage was a thing this summer? how did I miss that? The only time I recall that being popular was the glorious low rise jeans fad of the early 2000’s. Between that, girls showing off their hip bones and bare midriffs, it was hard (penis wise) to be a man during that time. It was sensory overload…and I fucking loved it.

Sure, technically, it was corny…but I’m a guy and what’s corny to other girls could not mean less to me. I mean, shit…you guys care about things like purses and necklaces and I’ve literally never noticed either of those things on anyone.
Granted, you’re always gonna have the girls who shouldn’t be wearing those kinda cloths that give them a bad name but, for the most part, it was awesome. Nowadays, this whole high waisted pants thing with girls is a real bummer. 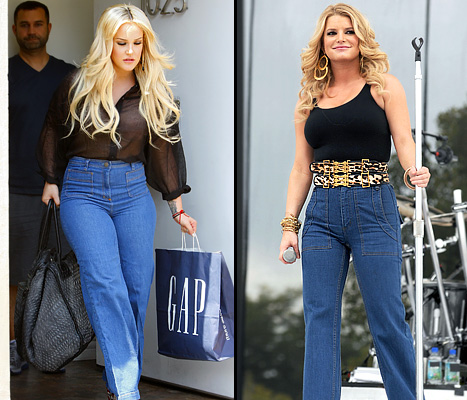 It’s as if you guys are doing it just to disappoint men. Even a really fit girl looks like she has a gut in this pants. It’s not flattering to ANYONE. I get that it “makes your legs longer” but still…I swear…girls and their fashion. I’ll never understand it.

We aspire to make this world more symmetrical. Case in point: Everything we build…and I believe that there’s almost something post-organic about technology…do we hail from aliens?

Do you ever notice or pay attention to the music they play in the stadium during NBA games? Any thoughts?

I mean, it’s just music played to hype up the lowest common denominator. Where else are the guys who made “Cotton eye joe” gonna earn their royalties from?

I’ve honestly evolved the ability to drown out background music. I hear it but I don’t really hear it. It comes from a decade of going to this thursday night 80’s dance party at this place called Don Hills. I went for so long from age 18 to about 30 (it was the best weekly party ever) that I knew the DJ’s set list by heart and would just blank it out. I don’t even dislike 80’s music. I grew up on it. But , after a while, it all become white noise to me. Thanks to that, I’m able to do that with most types of music when it’s playing loud. At clubs, sporting events or even at shows I’m playing at (opening acts and such). It’s really handy.

Few days ago I was talking with an old dear high school female friend (we’re both 21 years old now). At a certain point she told me she saw in a disco an old friend of mine making out with this girl that fucked maybe the same number of guys of a pornstar. She (my friend) pointed at that like a disgusting thing because this girl smelled, was dirty, fucked in general lot of guys ecc… Now, I think this type of girls deserves to be fucked in all the ways ONLY for pure entertainement, ABSOLUTELY NOT serious relationship things. What’s your opinion on this kind of shit?

The european-ness of this english is priceless.
Also, LOL at having a “dear old friend” and you both being 21.
Anyway, this isn’t the easiest thing to translate so let me try and clarify…
Your friend saw some guy you know making out with the town slut. You friend was appalled but you were more like “Eh, whores gonna whore…”.
Well, over here at Phat Friend, I’m not about slut shaming. In fact, as long as the girl is doing it for the “right” reasons (she wants to and she enjoys sex on a real level) then I see no problem with it (safe sex yall!). However, if that girl is doing these things cause of other issues or reasons that have nothing to do with sex (she’s lonely, she was abused, she’s insecure) then it’s an problem.
Also, I find it funny how other girls love to throw words like “dirty” and “Smelly” at promiscuous girls. As someone who has slept with a few girls that might be considered this, I gotta say, they’re generally clean and smelled great. Probably cause they took a lot of showers and had a fully realized “clean up” ritual that a lot of less sexually adventurous girls might not be up on. Some of the stinkiest girls I ever hooked up with were the ones who WEREN’T slutty. I suppose, the less you use it, the less maintenance you think it requires? Who knows. I have a penis.

Saw you with emancipator back in Boulder in 2011. It was a rad show, your sounds compliment each other well. Since you’re on tour with him now, I gotta ask – what’s it like touring with him?

Doug (Emancipator) is legit one of the sweetest guys ever. That makes him sound like a girl but, for real, he’s just such a nice, chill guy. Ilya too (he plays violin with him). I love touring with those guys cause , aside from them being low key, easy going guys, they tend to surround themselves with like minded people. There’s never any drama. Although, the last time I saw him , he got me for like $60 bucks in C-lo in like 5 minutes. I will have my revenge. YOU HEAR THAT, MOTHERFUCKER!!! I WILL HAVE MY REVENGE!!!!!