What’s crackin’? It’s another lovely monday on the eastern seaboard , which means it’s cold as fuck and gonna snow any second now. Bout that life.
Anyway, did you guys watch the Oscars last night? OMG! So many great outfits! Can you believe that suit that one guy wore and that necklace that whatsherface wore? Life changing.
Enough pleasantries, this is that column where you guys ask me stuff and I answer it. Most everything is in play. If you have a question you want me to answer, send it over my way. Either email it to me at phatfriendblog@gmail.com or leave it in the comment section below. I’m always looking for new material. Just try and keep it interesting.
Without further ado, here is this weeks crop.

From your times touring around Europe, how did you feel about the different customs for greeting women over there? I’m talking about the one or two cheek kisses thing (or even three kisses in some places). Do you feel comfortable doing it or do you feel awkward and mess it up by going for the “wrong” side first?

The double cheek kiss thing will always throw me off. I go to europe and I’m constantly leaving ladies hanging with the second kiss. It’s actually a lot like when I’m out west and I give people pounds and they’re expecting that stupid ass fist bump afterwards. I always forget and then try to redeem myself , which results in the classic awkward white dude pound.
But, yeah, in europe, I always forget. Luckily, I tend to just go for the direct hand shake with strangers and that kinda limits the awkwardness. I’d say what REALLY fucks me up is when someone in the states does the double cheek kiss (or when a man goes in for a cheek kiss). I’m not prepared for either of those things and they both tend to result in either me almost accidentally making out with a girl or having a dude kiss my neck. I’ll tell you, the whole greeting system is fucked. I’m a fan of a pound for dudes and a hug or cheek kiss for women but if we could just all agree that a simple handshake was the way to go, I wouldn’t be mad.

Question:
I’m sorry to bring such unfavorable feelings upon your Monday, yet I’m curious to know which victims of gentrification on the island of Manhattan you personally miss the most? Specifically:
-bar
-nightclub
-diner
-pizza place
-any type of restaurant
-record store
-did i miss anything?

The thing I miss most is neighborhoods having a certain feeling. You could really differentiate between areas when walking around. That still exists to an extent but nowhere near what it used to be like. Otherwise, I’d say, by far, the answer is bars. In Manhattan they’ve seemingly gone out of their way to shut down any decent dive bar and replace it was some shit like a natural food store or a duane reade (that’s a local drug store chain in NYC).
Funny thing about all the other things you’ve listed, none of those bother me.
I never gave a shit about night clubs.
Pizza will always be fine in NYC.
Diners come and go but they’re always gonna be good ones that are open 24/7 within walking distance.
Record stores have taken a hit but I can’t say I go to record stores much any more. Also, I’d say that’s a nationwide thing more than just NYC.
and the restaurants? You know what…the food has never been better here. Sure, a bunch of great and important places have closed over the last 5 years and that sucks but a dope new spot opens all the time. As lame as NYC gets, the food situation will never be a problem. I will die a well fed fat man.

what is your definition of a “technical rapper” like what the fuck does that even mean? can you list examples of technical and not technical?

To me, a “technical” rapper is one who is highly skilled in his “technics”. Meaning, he can flow effortlessly, he knows how to use his voice, and he’s versatile. Guys like Busta Rhymes or Black Thought are perfect examples. Those two can basically do whatever they want, in terms of how they rap and what they can pull off. That said, lots of times , it’s not enough reason to like a guy. Black thought is a prime example. Dude is unquestionably good at rapping. Every facet of it. But I dunno, I just never feel like listening to him. I’ll take someone like MF Doom over him any day even though his technical skills are somewhat flawed in comparison. In lots of cases, personality can take you way further than technicality. But, if you ever see me review a demo on here and say the rapper was a good technical rapper, it just means he’s refined his skill set and knows how to rap. But it doesn’t mean he’s automatically good or interesting.

Yo Block, these questions have been getting soft as pussy on here, so I’ma break it off with the raw uncut. Hypothetically speaking, if you had the option of A) Being able to fuck your perfect 10 (any girl from any era) under the condition that you could only finish by fucking the soles of her feet, or B) Fuck the hottest girl that you’ve ever been with in your life (minus the foot part) for the rest of your life, what would you choose?

Thanks you for hardening up these soft ass questions.
Okay…I’m confused. Does this mean, if I do option A that I would be allowed to fuck other girls after that? Also, does it mean that in option B I’m basically bound to fuck that one girl forever? I’m gonna assume both those things and EASILY pick option A. While I’m far from someone who likes feet, I’m sure I could pull off a little foot jizz session if needed…especially if I’m having sex with the perfect girl. And, truth be told, it being a one off is just more appealing to me. I’m not a guy who’s into forced contractual things, especially where sex is involved.
The problems with option B are ,according to the wording, I’ve already had sex with this person. What if the hottest girl I ever had sex with was lame in bed? What if she wasn’t but maybe I don’t wanna have sex with just her for the rest of my life? All these things don’t always go hand in hand and, truth be told, there’s not a girl on earth that a guy isn’t gonna eventually stop lusting for.
In general, when given these kinda questions, I’mma most likely chose the one that’s less of a commitment. Even if it means busting nuts on the soles of someones feet.

I’m always on the lookout for a good baseball hat. So when I went to the hall of fame, I had to hit a hat store in Cooperstown. The place I went into had thousands of hats to choose from. I noticed that most hats now are a “high crown” style. I’m not a fan.

What do you look for when purchasing a hat? High crown style? Fitted? Slouch? Snap back? Flex fit? Any particular company? Etc…

Shit…I dunno. I’m clearly a hat guy but I don’t really have one type of thing I look for. I’ve been rocking snap backs lately cause I got tired of all my fitted’s shrinking cause I sweat in them.
To be honest, I’ve pretty much stopped wearing baseball team hats and have moved on to more random things. I have a corduroy hat with a tiny elegant bear on it that I’ve been rocking lately. This one:

Before that, I was wearing a promotional hat for a friends indie movie. Before that, I was rocking this hat some dude gave me in russia that was big upping some crew in St Petersburg. I like having hats that no one else is wearing around me or anywhere I go. So,yeah, I tend to keep it pretty random. RIP to all my Orioles hats though. That’s my #1 hat of all time.

I have a serious question though now. Which guy do you think has fallen deepest into the ZONE? 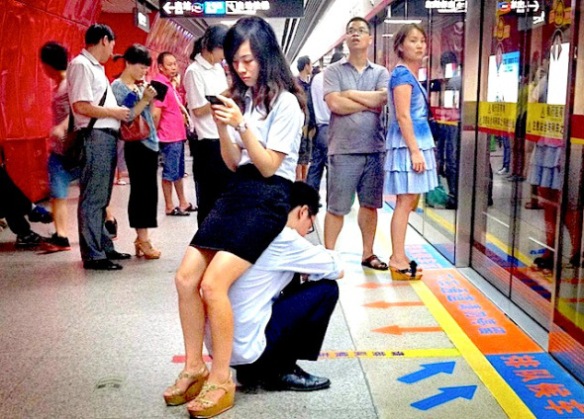 EXCELLENT question. Seriously, when I say “get creative” this is what I’m talking about.
Let’s go through each pic and figure out what we have here.
Picture 1:
This dude is not in the friend zone. In fact, he’s gonna hit it in the very near future. That look she’s giving is one of “You’re gonna ejaculate on my feet very soon”. He may have taken the nice guy angle with how he bagged her but rest assured, it worked and he’s as far from the friend zone as you can get. In fact, I’d venture to say he’s probably a scum bag and she’s gonna hate him soon after he hits it and never calls her again.

Picture 2:
This one could go one of two ways. He’s either the biggest sucker alive and she’s the worst human being ever for allowing him to degrade himself like that OR this all part of some weird sexual thing they already got going on. Maybe being used as a stool in a train station is the only way he can achieve an orgasm? Who knows. Listen, we all know japanese people are often into bugged out stuff (my apologies is this is not in Japan , I can’t read that writing and this just seems like a very japanese picture). This could be foreplay? Especially when you consider gender roles out there. Shit like this doesn’t happen unless the men allow it. So, this guy is either in the slave zone or he just has a fetish for having his neck farted on.

Picture 3: Ding Ding Ding! We have a winner! This guy is locked into some serious talk about bullshit over a piping hot cup of herbal tea. She looks like she just got back from the gym and might even think he’s gay. Right now, she’s rattling off details of her boring ass day and he’s nodding away, pretending that any of it matters or is the least bit exciting. He is her emotional sponge and he’ll continue to be that guy until she either starts dating someone else or literally tells him “I don’t like you like that”. That said, I’d still say a window is open for him. It’s a small crack but I think , in the right situation under the right circumstances , he could sneak in there. If not for just a night.

Really, none of these three pics are dead in the water friend zoned dudes. For that…look not further than this poor guy: 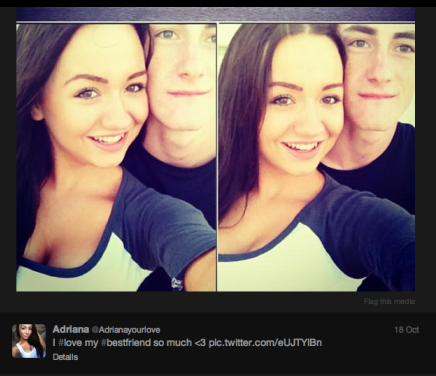 How does your gf deal with the cornucopia of…if you were single, would you…hypotheticals that you’re thrown at within “that bloggin life”? She seems like a true gem, to be sure!

She’s what we call a reasonable human being who is able to differentiate between reality and the hypothetical. It’s actually pretty awesome. I’ve been with girls who were not so logical and it’s the worst. It is funny that that would be considered a quality of a “gem” when, really, it’s something any adult should be in possession of.
But, yes, she is a gem, for reasons far beyond that.