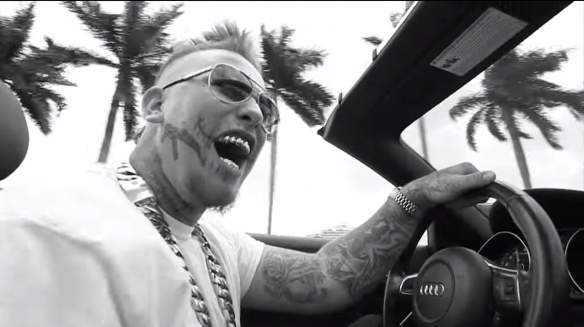 So, umm, how you feeling today? Mellow? Relaxed? Like life is a bubble bath? Well, I got just the thing for you. I just saw a video of a new rapper that will rub you one of three ways.
1)You will hate it so much you will turn it off before it even becomes clear what is going on.
2)This will make your day , as it is fucking hilarious.
3)You will legit love this song and repost it on all your social networks.
For those of you who take rap music very seriously, this is not for you. I love rap too ,guys, but sometimes you gotta just let your guard down and embrace comedy as comedy. Let me stop rambling and just show you what I’m talking about.

At very first glance, the question that immediately pops into my head here is “Is this guy from Florida”. A few seconds into the video, that question is answered with a resounding “yes!”.
Stitches is an 18 year old rapper from Miami. He’s got an AK 47 tatted on her face. That’s commitment. He’s half cuban and half Greek and, more than anything, he loves selling bloowwwwwwwwwww!!!!!
He’s got the blood/drug lust of Gunplay, the energy of Mystikal, the social graces of Tim Dog and the fashion sense of a Rap/rock nightmare. This dude has got undeniable…energy. I don’t do coke but I’d imagine that hearing this while ski’d up would result in broken furniture and possibly broken friendships. This is the musical equivalent to being pushed off the top of the empire state building. Honestly…it’s just so insane on so many levels, I keep watching it and forgetting what I want to say about it.
Side note, it’s always impressive to me when these homemade videos look so professionally made. Is it simply that things look better in black and white? Part of me feels like these types of dudes deserve credit for being able to artfully (yeah, I said that about this) capture themselves in a way that’s both compelling and visually pleasing. I dunno. It’s so easy to make a bad video and then a guy like this comes around and makes this. Say what you will…it’s pretty fucking compelling.

31 thoughts on “This week in ridiculous rap: Stitches”