Hello everyone. I hoped you enjoyed your labor day. I waited till the final weekend of the summer to actually step into the sun and now my legs and arms look like red hots. Awesome.
Anyway, this is where you guys send me questions and I answer them. Simple stuff. If you’d like to join the fun, please do! email me questions at phatfriendblog@gmail.com or leave the questions in the comment section below. Br creative. Get weird. It makes it more fun for both of us.
Here’s this weeks batch…

Hey blockhead I’m a huge fan of both your music as well as phatfriend and a question id like an answer to is what (in your opinion) was the most freakishly bizarre thing that you’ve seen, heard, or experienced while touring? Im sure its been asked a million times but I really appreciate a good what the fuck moment.

I’ve actually had a fairly tame touring existence. I think that has to do with me not really hitting the road extensively till i was in my later 20’s. I’ve also been in a relationship for most of that time so that kinda wipes out any crazy/funny groupie stories that might happen otherwise. I’m always envious of people in their early 20s who tour. That must be so much fucking fun.
The only stories that pop into mind are ones about safety in cities I was unfamiliar with.
This one time I played a show in Detroit. I was staying in a hotel about 5 blocks from the venue. Being someone who’s used to walking everywhere, this was great for me cause I didn’t have to deal with taking a cab or getting a ride to the show. i could just pack up and make it there on my own. So, I walk to do soundcheck around 4 pm. I Do that and just sorta kick it at the venue till it’s time for me to play. I was an opener so I finished my set around 10ish. I get paid and I’m all ready to walk back to the hotel but the people working there are like “NO!!!!!”. They literally wouldn’t let me walk 5 blocks cause it was night time in Detroit. I tried to make a case of “It’s all good, I’m from NYC and this is how we get around” but I had a dude stand in front of the door like “No man, we’re calling you a cab. Trust me on this one”. So, I drive back (it’s like a two minute drive) and the streets are empty. In my mind, I could easily have just walked back with no issue. The next day, I run into a dude who was also performing that night and apparently he had gotten robbed and punched in the face…in the stairwell of the hotel we were staying in. Fair play to you ,Detroit. You are terrifying. i will never question your safety precautions again.
The other time that I recall is playing in Milwaukee. I finished my set and couldn’t get a cab cause there were too many people already getting cabs outside the venue. So, I did the thing I’d do in NYC and just walk up a few blocks and try and intercept cabs before they hit the main strip. So, I wander into what looks like a suburban residential area. Like nice houses with lawns and shit. I’m kinda drunk so my attention isn’t exactly laser focused. Out of nowhere pops two crackheads. A guy and girl. They start chatting me up and I’m just sorta casually shooting the shit with them. I’m pretty much just waiting to see if a cab comes by while these two crackheads ask me crackhead like questions that are basically working their way towards asking me for a dollar. It’s a dance I’ve done before and it’s no different no matter what city you are in. 5 minutes into this conversation, a little clarity takes over and I realize I’m standing in the hood. I guess I was so oblivious cause, well, it’s Milwaukee…but nah, this was actually a totally fucked up ghetto I was chilling in, on the street , at 2 am with two crackheads. So, I told one of them “Hey man, you find me a cab, I’ll give you 5 bucks” (to be clear, the crackheads were not a threat. They were old, small and cracky). He dashes off and two minutes later a cab pulls up. I honestly have no clue how he did it. I gave him five bucks, wished him and his lady well and got the fuck out of there. Right before the cab pulled up, I looked down the block and saw a mass of people moving my way. they were too far to really see what the deal was but I could tell it was a group of 10-15 people. By the time the cab got there, they were maybe a black away. As I drove by them, I saw a group of drunk teenagers kicking over garbage cans and pretty much just fucking up everything they passed. Like a dust storm of trouble slowly destroying everything in it’s path. So, basically, that crackhead saved me from a possible incident. So, in a way, hooray for crack!

Why do the men of NYC catcall to the extent that they do? It’s in a league of its own (when you compare it to any other major city within an English speaking country that is)
Is it worse here? I’ve never noticed. Clearly, I’m a guy so it never happens to me (except on gay pride weekend) but it’s not something I really pay attention to. Like , i walk by construction workers every day and never see them say shit to women. This in no way means I don’t think it happens (I know for a fact it does) but you’d think , if it was a prevalent ,I’d see it with some frequency. What I do see all the time is scum bags kicking it to girls on the street from their cars. That’s the worst. That and dudes who just creepily stare a hole into girl when they walk by them. I mean, shit, I look at girls when I walk around but I’m at least subtle about it. A quick glance and maybe a head turn if I wanna see the backside. But Some dudes will straight up stop walking and stare at a girl like she’s on fire. The funniest is when I see a gross middle aged dude stare at a wildly mediocre looking girl like that. That’s some “i just got outta jail” shit.
but why is NYC the worst about this? Probably cause it’s the most walkable city in the US and it’s full of people. That alone is gonna make any social interaction more common. Especially ones involving scum bag degenerates.

I don’t think I can pinpoint one person. I have a bunch of twitter and facebook followers who annoy me. Some say snarky shit for no reason (and aren’t funny). Some do that thing where they just reiterate a joke you just made right back to you. Others are just straight up weirdos who tweet cryptic nonsense at you all the time. Those people scare me a little cause they seem very unhinged. I’m a fan of sanity online so anytime someone comes at me from a weirdo angle, I tend to want that person to go away.
I think what happens is that I’m pretty accessible on those sites and people see I joke around so they assume they can fuck with me like they know me. Problem with that is , they don’t know me and that kinda shit talking (playful or not) doesn’t translate on the internet. It would be different if we were friends and had that familiarity but we are actually total strangers so it doesn’t work like that. I can’t tell when someone is being an asshole or just kidding. And cause there are so many real assholes online, I just assume people are being the worst at all times.
Also, anyone who has ever seriously said “first world problems!” to me after I tweeted a joke, I hate you so fucking much. Not only cause that’s a corny thing to point out on the internet (first world thing right there) but it just shows a lack of creative thought in how you go about interacting with people. Especially strangers online. Basically, it’s something dickheads say to make themselves feel better by trying to make others feel like shit. Fuck that. If you’re following me on any social network, there’s a 95% chance you’re chilling comfortably in the first world.

Which t-shirt slogan do you think best embodies the angle of your average bro on tinder? 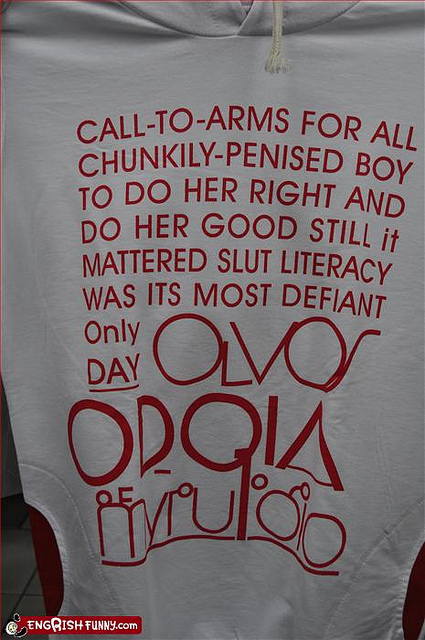 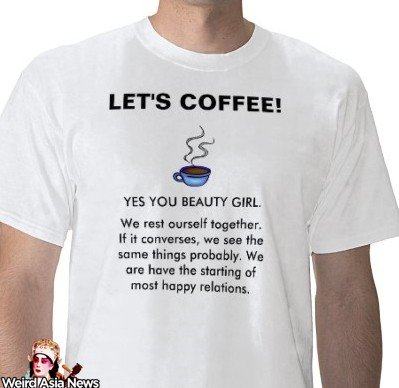 I’m not on tinder so it’s hard to say but, from what I’ve seen, it’s more douche bags than people who can’t speak correct english. So, I think I’d say the “Phat Dong” shirt is most indicative of tinder Culture. A bunch of dudes looking for the quickest possible route inside a strangers vagina. Dudes who wear shirts that reference their dicks generally aren’t the classiest fellows.

Hypothetical question: If sampling became completely outlawed, or for some strange and unimaginable reason it simply didn’t exist any more… Would you attempted to make non sample based music? or just bite the bullet and give up music?

I mean, it’s getting close to that point, isn’t it? People can still sample but making money with that kinda music is basically a wash.
To answer the question, i would be extremely bummed but I think I would push ahead. What I’d probably do would be align myself with some good studio musicians and just “produce” in the old timey sense of the word. I’d do the drums and whatnot but pretty much orchestrate the rest. It would certainly make creating music a pain in the ass and far more complicated but it would be better than nothing.