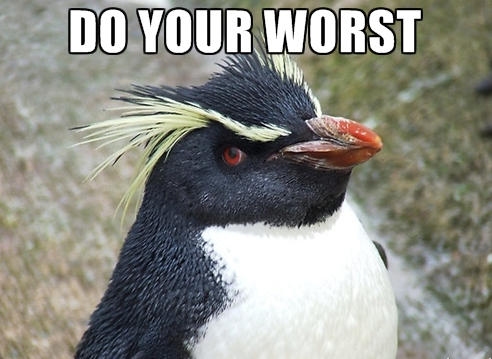 Whattup everyone…It’s the moment all the self loathers have been waiting for! I’m opening up the flood gates once again for demo submissions. If you have a song you’d like me to review, now is your time to both shine and possibly get shit on as well. However, before you just submit me something. There are rules. PLEASE READ THESE CLOSELY BEFORE SUBMITTING ANYTHING TO ME. They are crucial to your demo even making it to the review process.
1)The header on the email must say “Demo review”
2)If you’ve already submitted, DO NOT submit again. You had your fun now it’s other people’s turn.
3)Send me ONE SONG. Pick your song that is your favorite or the one that best exemplifies your music and shoot it over here. I’m not going to listen to your whole ep.
4)This time around, I’ll only be accepting songs that can be heard via a link. So, no loose mp3′s or myspace pages. I want soundcloud, bandcamp or you can even upload it to an upload site (like divshare.com, hulkshare ect…) that allows the songs to stream. Basically, the streaming part is crucial. If this is something you cannot do, you probably shouldn’t be sending me music in the first place. Also, i accept Youtube links but think it’s weird when that’s the only way you have your music on the internet.
5)Demo MUST contain original production. I don’t want mixtapes of you rapping over other peoples tracks. I want actual songs.
6)Don’t just send me some random beat you made. I want a finished product. If your shit is called “Untitled beat” I will throw it right in the trash. If the entire track is a loop with drums, it’s not a song. I want songs, not some shit you’re workshopping.

That’s about it for the rules. But there’s more…You must also accept that I will be reviewing your music honestly. I don’t know you. You aren’t my homeboy. I may write some shit you don’t wanna hear/accept. That’s fine and all but just know it’s possible. Butthurt responses will be clowned on properly. Trust me, I’m as familiar with internet criticism as any person who makes music for a living. It sucks but it’s part of the deal. After all, you’re sending me your music so I can review it. what else do you expect? By submitting, you’re pretty much agreeing to possibly being let down.
It should also be noted that , genre wise, I’m a rap guy. I like rap music. This can work both for and against you people sending me rap as I will be highly critical of it but there’s also a chance I might actually like it. Where as with other genres (particularly instrumental music and electronic type shit) I don’t really listen to that kinda stuff. The further the genre is away from hip hop, the less likely I am to not only be about it but give it a worthwhile review. I don’t know enough about those genres to really have perspective enough to review them.
Feel free to send it but just know my ceiling of enjoyment for that kind of music is typically pretty low. Ironic, I know…but it’s the reality of things.

Got it? good.
So, send away to my email
phatfriendblog@gmail.com

1 thought on “Send me your demos! Now is the time!”