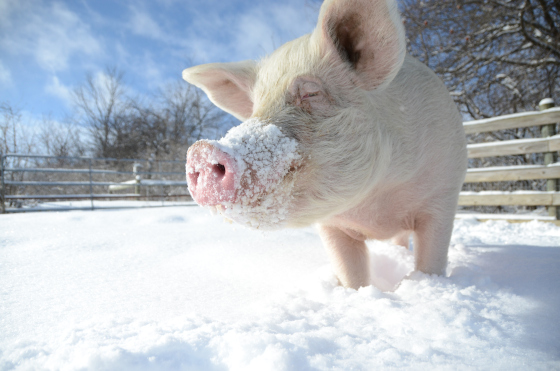 Shalom! I’m sitting in a hotel in Tel aviv right now. So, that’s happening! But, in honor of all the snow I hear that’s dumping on the east coast while I’m gone, here’s a sweet, frosty little piglet for you to cherish.
Anyway, welcome to another edition of “Answers for questions”. You ask’em , I answer’em. As always, I need more questions! Ask em shit !Anything! Send the q’s my way! Either leave them in the comment section or email them to at phatfriendblog@gmail.com. Get creative.
Anyway, …Let’s check this weeks batch.

When listening to gangsta rap, do you ever wonder how gangsta the rapper actually is? There are some actually gangsta ass motherfuckers out there rapping for sure, but are you ever listening tosomething and think, “This guy is just good at acting hard.”?

I used to care about that a lot more but nowadays it only bothers me when someone who is clearly not hard is talking shit. Like, when Drake starts popping off like he’ll fight anyone. But, in general, I assume most thugged out rappers are like 20% as thugged out in real life as they say on their songs. I’ve met plenty of real thugs over the years and those dudes do not give a fuck about making music. That said, there are certainly some rappers out there , ESPECIALLY now, who are no joke. Bobby Shmurda and Cheef Keef come to mind. They’re more examples of thugs who happen to rap.
Keep in mind, this is all coming to you from a person who hasn’t gotten into a fist fight since 7th grade. So, you know, take it for what it is.

How self-conscious do you get when you’re on stage? Which factors alter or affect this type of feeling?
I’m usually okay. My live show involves a type of concentration that I can’t really think about being self conscious. Like, I’m not going to look particularly cool regardless so it doesn’t bother me.
I’d say having my visuals playing the back ground and good stage set up settle me down even more.
Things that can annoy me or rattle me:
Playing a huge room with no visuals for a crowd who is not there to see me.
A super low stage where I’m faced to face with people and they are able to talk to me like I’m just doing a lounge.
People walking around behind me while I play.
People not moving during the show. Like there’s always a few dudes who stand up front with their arms folded , staring at me. I hate those guys. The back of the room was made for those guys.
Those things are definitely not my shit, when it comes to doing live shows.

From your Reddit experience, what makes a good question coming from a stranger and what makes a bad one?
I’ve been asked all sorts of shit over the years (This very column has been going on since the myspace days) so , in general, i’ve been asked everything. What make a good question? Either someone being creative , someone who is setting me up for a good rant or someone who is obviously familiar with my music asking me a nerdy question. I like those. There have been a handful of interviews where the interviewer I had was clearly a fan and it makes talking about myself so much easier. Where as, someone asking me “What kind of music do you make?” is pretty much the worst. To me, bad questions are either just the same boring bullshit over and over again (WHy do they call you blockhead? What are your influences? What inspires you?) or when people ask me silly questions that are more about them getting a joke off or injecting their opinion into things than anything I might actually have to say. Oh, and “What do you think off “________” (random artist)?” . Fuck those questions. They’re either boring or someone is baiting me to talk shit. I’m not into it. Trust me, if I want to talk shit, I will.

Other than English, what are the most common languages that you come across when interacting with fans online?
Hmm…it’s pretty much all english, as far as the interacting goes. No one writes me in other languages. If they did, i couldn’t read it anyway so i wouldn’t even know if there was a question being asked.

flash back to your smoker days for this scenario. suppose some mystical hippie you met in the park offers you a pipe that’s always smoking. you never have to pack it and you get unlimited hits to infinity. but it never stops smoking. whether you’re hitting it or not there’s a constant stream of smoke pouring out of it. do you macguyver some way to contain the smoke or pass and just keep buying regular green?
I would definitely pass on the mystical hippie pipe. I was never THAT big a smoker when I did smoke. I barely bought my own weed in general. I also lived with my mom for a portion of that period so having a constantly smoking pipe wouldn’t work for me. So, yeah, i’d pass but I’m sure there are a few weed loving cornballs out there who read that idea and were like “whoaaaaaa dude!” :hippie boner:. To be fair, I’ve had a similar fantasy with a refrigerator that is always filled with the best food or a TV that i can take things out of when they’re on the screen.

Here is a question for you…where did Spark Master Tape go? I have definitely dug him since you turned me on to him and for a while there, he came through with some good tracks about ever month or two, then all of a sudden…nothing. His social media seemed to die last year and I haven’t seen anything from him.
Man, I don’t know. I need him to make some more music. I actually tweeted at him a few weeks ago and got nothing . Perhaps , whoever it was that was doing that, lost interest in the character. It’s too bad cause those tapes were my shit. Here’s the last song I heard of his:
I need more…