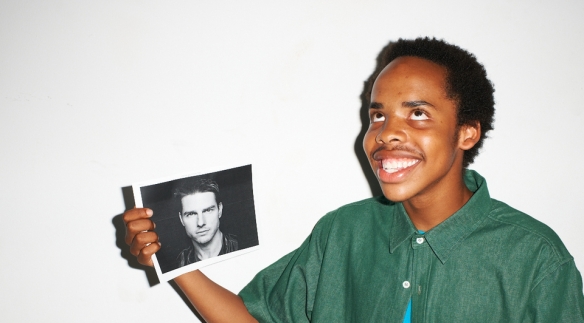 It’s been a big week for releases that everyone is losing their mind over. Kendrick dropped an album and the internet exploded. Apparently, it’s the best album ever made. I haven’t heard it but , honestly, I’m just not really into him. Dude is an exceptional rapper and has a very strong vision that I respect greatly but I simply never feel like listening to him. It’s not him, it’s me. Action bronson also dropped a new album. I haven’t peeped it yet either but with Bronson, you kinda know what you’re getting. He’s funny and strange and has a good ear for beats. I’mma definitely check it but there is less urgency there.
The last dude to drop something new is Odd Future’s pride and joy, Earl Sweatshirt.
It’s streaming here:
http://www.rapfavorites.net/earl-sweatshirt-i-dont-like-shit-i-dont-go-outside-stream/
Now, i don’t typically write reviews on this site. As an artist, it’s just kinda shitty to do. Let the people who don’t make music have all the opinions, right? It’s just so easy to be biased , as an artist. That said, every now and then i get inspired. It’s not usually for good reasons though. it’s usually cause people are freaking out and I have it engrained in me to be like “Hey, chill out..it’s not that good or bad…”. I’mm libra, yall! I did it with “Yeezus” and I did it with Earl’s Debut “Doris”. Doris was okay. it had some good songs but, overall, earl seemed bored and a little all over the place. It was kinda like an album made by someone who didn’t really want to make an album. With his second album “I don’t like shit, I don’t go outside” it feels like we’re getting the album we had hoped his debut might have been. All the complaints about his first album (he’s got no energy, the beats are meh, the songs don’t go anywhere, wasted talent, etc…) are pretty much fixed on this album. I’m not saying this is perfect album or even close to that but it’s definitely very good and huge improvement.
As a dude who always pays attention to beats, the initial thing that jumps out to me is the production. I could be misinformed but I heard that Earl himself produced the majority of this album. That’s pretty impressive. It’s got a very specific sound and it feels as though earl, by making his own tracks, is able to be himself musically. Sure, he can rap on menacing Tyler the Creator beats but he’s clearly way more at home over slow, somewhat off kilter jazzy beats. He likes rhodes and pianos. Simple melodies really but when you rap as well as Earl, that’s all you really need. He even delves into some instrumental stuff as some of the songs trail off into totally different , all musical parts. In general, he creates a pleasant backdrop for him to do as he pleases with. And that leads me to the next improvement. Earl has always been a great rapper. When he first came out, i was writing on this very blog about how he may be the best 16 year old rapper since LL cool J was rapping in Krush Groove. On “Doris”, that skill didn’t go away. He could still write and rap in a way that was often so good it slipped by you without resonating. I’ve definitely had moments listening to songs off “doris” that I hasn’t given much thought to when, all of sudden, it would hit me “Damn..he just murdered that verse” why did I overlook it? Probably cause he rapped with the enthusiasm of a kid reading aloud in class. On his new album, it seems he’s got a little energy. Sure, there are some songs where he’s still the quiet and reluctant rapping earl but having the tracks where he actually raises a voice a little bit really evens the whole thing out. It’s like if Eminem had only rapped like Triumph the insult comic dog on HALF of his songs, that album might have been more palatable. Nah, it would have still sucked but you know what I mean.

Another thing this album has going for it is great guests. Last years rapper of the year (in my opinion) Vince Staples returns to do what he does. Ratking’s Wiki pops up out of nowhere for a bi-coastal song that was a joy and surprise to hear. and then you got the two dudes I’ve never heard of…Dash and Na’kel. No clue who they are are or where they’re from. They could very well just be dudes Earl smokes weed with but, whoever they are, I like them. I can’t say either will be a star but what they contribute on the album definitely adds to it as a whole. That’s what posse cuts used to be like. Instead of gathering famous rappers to spit throwaway verses, dudes would just let their unknown boys get off a verse. Sometimes it was good, sometimes it was bad but it was always interesting to hear.
Another thing I really like about this album is that it bends for no one. Earl basically made an enjoyable rap album of somewhat depressing songs about being anti social. There are no singles. So much so, the first song he dropped, “Grief” may be the least accessible song on the whole album.

I almost feel like he dropped that first just to be like “Fuck yall”. I know when I first heard it, i was like “hmm…i like the rapping but that beat isn’t really my shit…” but , when heard in context with the album, it makes a lot more sense.
The final thing I’d like to point out is how goddamn listenable this album is. Not just musically.It’s a great length (pause). It clocks in around 30 minutes. You can listen to it twice in an hour. That’s no filler right there.
So, yeah…Good job Earl!

17 thoughts on “So this new Earl Sweatshirt album..”