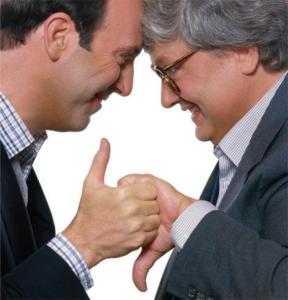 Movies. They’re cool and all but, sadly, most of them are a complete waste of time. Not everything can be the new MAd Max movies so, when that happens, I’m here to save us all some times and review movies I haven’t seen based entirely on their trailers. Cause, let’s be honest, we all “get” it. In those 2-3 minutes, you see all you need to know. So, allow me to get my Ebert on.

I think my favorite part about disaster movies is how realistic they are. Like that 9.8 on the ricter scale earthquake that tears apart the entire state of california…when that happens, y’all are definitely fucked. Unfortunately for you, you won’t have dwayne “The Rock” Johnson to save you. I’m pretty sure The Rock and Earthquake have wrestled in real life but this is a whole different beast.
This is an earthquake with feelings and anger. It’s not random or aimless. This earthquake, much like the tidal wave in “The day after tomorrow” or that other earthquake in “2012”, is a guided missile of hate aimed directly at who ever happens to be on screen. The Rock, however, is not having it. he’s gonna fight that earthquake. Maybe he’ll drop the peoples elbow on it from atop the Golden gate bridge? you never know! Can you body slam aftershocks? I suppose we’ll find out. All I know is that, when the dust clears and millions of lives are lost in this made up situation, you can bet that The Rock will be standing tall atop a pile of rubble, holding the women he’s currently fucking in his arms like a championship belt. Can you smelllllll who the Rock is fuckingggggg!!!!!!!?!?!?!?!

Now, this is a star studded cast of likable motherfuckers. There is no denying that. I don’t doubt there will be some entertaining or endearing moments but hear me out…it’s a Cameron Crowe movie. To some of you, that brings a smile to your face cause Crowe has long been the manufacturer of likable movies about likable underdogs who do likable shit blah blah blah. I’d be lying if I said he’s never done good work but, at the same time, I’d also be lying if I said he wasn’t the epitome of “basic white person melodra-medy”. He’s got an equation and he runs with it. It works. This movie might as well be a glass of white wine being sipped on the deck of a hamptons beach house. This movie is wealthy but it also voted for Obama. This movie knows how to crochet. This movie knows exactly what side to put the tiny fork that’s possibly for salad or cheese (I don’t know) when setting the table at a dinner party. This movie is gluten free. This movie plays tennis on sunday mornings with it’s college buddies cause, you know, it’s a tradition. This movie secretly says the N-word when it’s alone.
Does this make it a bad movie? Probably not. But I wouldn’t really wanna hang out with it either.

We are your friends

HAHAHAHAHAHAHAHAHAHAHAHA!!! This movie HAD to happen. It was a matter of time. Shout out to Max from “Catfish” for being the guy bold enough to make it.
The success/underdog story is no new thing. It can be interchangeable with any skill. Ping pong, bar tending, golf, child rearing. Anything. It’s really a sure shot way to make a movie people will sit through even though it always ends the same way and the same pitfalls happen every time.
In the case of the struggling EDM dj, this is especially hilarious. For many reasons…for one, they make it seems like being an EDM dj is some deep soul searching skill set. That’s awesome. Also, they make it seem like making EDM is an enlightening experience. They literally show this dude sampling the sounds of a stapler gun like a fucking foley artist. This isn’t Amon tobin…this is some asshole making ibiza molly music for teenagers. Oh, the life of an artiste!
Now, to be clear, I wanna see this movie. I wanna sit in my seat , seething. I want to inflict that pain upon myself cause , well, I just do. The same reason I sat through “Rent” or “Get rich or die trying”. Sometimes, you have to challenge your limits of human endurance. This movie will be like a clockwork orange moment for me. But I’m up for the challenge. When it comes to cable or torrents, that is. No fucking way I’m paying to see this piece of shit.
I should also add that Emily Ratajkowski is in this so I also might masturbate to it if it’s on and I’m alone. I only tell you guys that cause YOU are my friends.

This film is not to be confused with “The last bitch hunter” porn series, btw.
Man, to be the last of anything must be scary. I look at Vincent Diesel and feel his pain. I mean, in a world that was once filled with witch hunters, it must be a lonely feeling when you’re the last man standing. And think of all those witches that need to be hunted? There must be hundreds…thousands, even! That’s a lot of work for one guy.
As for the preview, do I hear an accent going on here? Was it british? I can’t tell. Diesel is such a versatile actor it’s hard to really put him in a corner with his dialects. It could be south african. Maybe just eastern european. Whatever it is, I’m sure he nails ever fucking word of it. He’s Vinny D! It’s what he does! He nails accents and kills witches. What more could you ask for.
Side note, if you’re excited to see this movie, you are a fucking moron. Is it me or does this look like the preview was made before the film was even finished? This feels like a poorly executed teaser , if anything.
Also, “You will be hunted” is definitely gonna take off as a famous tag line like “I’ll be back” or “My wife!”. It’s just so fucking catchy.