Howdy. Welcome to this weeks, answers for questions. You asked so, like the polite man I am, I answered. If you’d like to ask me anything, DO IT! Get creative! Get weird! email me questions to: phatfriendblog@gmail.com or leave them in the comment section below. There’s a 98% acceptance rate with these questions so do you worst or best.
Let’s see what this week has in store…

you know how weirdoes upload 12 hour vids to youtube of a gif or short clip on a loop? imagine some saudi oil baron’s 16 year old kid is planning to post one, and the kid is a fan of yours and wants to pay you $1 million for a blockhead original to go w the vid. but the song has to be 12 hours long too, and it can’t loop. it has to have a coherent subject and structure w fresh progressions and unique lyrics in every verse. but it can be about any subject you choose, bc the vid is prob just 12 hours of he-man laughing against a rainbow backdrop. for $1M, do you take the job? what topic do you make the song about? and who do you get to rap on it?
A 12 hour song? That’s insane. That’s like over 12 albums. It would take me years to make that and , as good as the money is, I honestly don’t think I could do it. Especially having it all be coherent. I’m simply not that driven to ever sit down and finish a project like that, ESPECIALLY, if it’s just for a youtube loop video. But, if i did do it, I’d have only one rapper on it: Phife from A Tribe Called Quest. Just let him spit every verse he’s ever written over the beats. That would just be hilarious to subject people to.

Back to my royalties question. Are you able to break down *how* you make money? You’ve been in the producing game for quite awhile. Especially in an industry that will turn against you (more likely your music) in a heartbeat. I’m assuming that everyone who reads your blog really digs your music. You deserve to have the world listen to you. But….they don’t. So, you’ve stayed relatively consistent for over 15 years making music? Can you break down how you’re getting paid?
I make most of my money from touring nowadays. That’s the biggest chunk of my income. Aside from that, royalties (on solo work and stuff with other artists), publishing and random little freelance stuff I get , round out my entire income. Every year is different. Some years I make a good 30 k more than I did the last year. It all depends. I don’t know what I’m gonna make one year to the next. Contrary to popular belief, I make enough money to live off of but I’m hardly raking in the dough. I think people assume that anyone making music for a living is automatically rich , which is hilarious. I’m good but I’m also careful about money. I always have been like that.

What do you predict will be the some of the most copied halloween costumes this year?
Caitlyn Jenner will be #1 and people are gonna have a meltdown over it.
I’m guessing Trump will be a big one this year. That’s lazier than wearing a “scream” mask, in my opinion. I’m sure there will even be “sexy trump” which will be a girl wearing lingerie with a trump wig on. Political people, in general, will be big. Hillary clinton, Bernie sanders. They’ll all be well worn territory.
I could see a lot of people dressing up like the Weeknd. Pretty much anyone who’s entire costume depends on a simple wig is always a good bet.
I could see a bunch of Duggar family based costumes. Like one guy with like 50 baby dolls attached to him. Or a walking “Ashley Madison” profile.
All this is making me think what I’m gonna be this year cause, last year, i killed it when I went as this random puppet i found at a store: 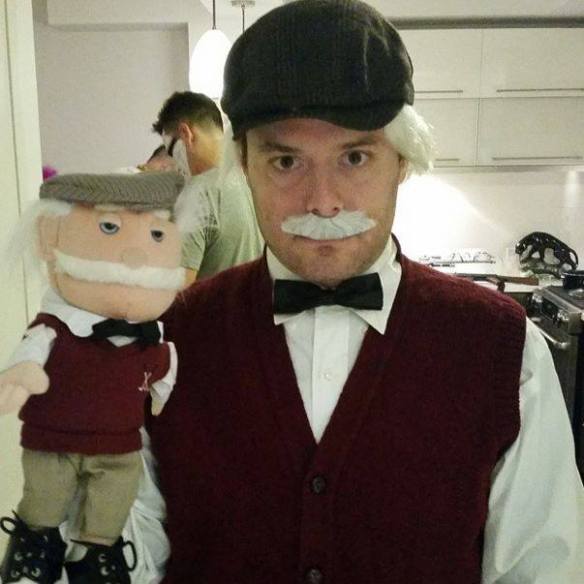 Me and my buddy love the Party Fun Action Committee album, and it would make my year to hear another one. But I get that you and Jer were just messing around back n da daiz, so I’m not getting my hopes up. But still, if you were to lampoon rap now, which rappers would you tackle? Any particular songs or styles?
I’ve thought about that a lot and , honestly, i think part of the reason it wouldn’t happen again is that I no longer am that tuned into music like I was back then. I wouldn’t know what to make fun of. I mean, sure, we could do a take off on the auto tune special ed raps trend, the silly make up dance move rap trend, the emmitt Otter jug band ass hipster music trend, the EDM dj shit…There’s lots to play with but I don’t feel as locked in to making fun of those genre’s as I did back when we did PFAC. Back then, MTV was still a force. We know how to make fun of Limp Bizkit cause it was on tv all the time. Now , it’s almost like the net is too wide to even really focus on one thing.

How tired are you of people just not accepting that you don’t dig your own style of music? I feel like every episode or two there’s a person trying to maneuver you into the instrumental music scene…
I mean, it’s to be expected. I think people who like certain artists tend to think those artists are going to share the same taste as them. it happens to me all over. Like people assume cause of the people I’ve worked with, that I’m partial to a particular kind of rap when I’m not into it at all.
The whole shock in peoples faces when they hear I don’t really fuck with any instrumental music is so common that it doesn’t even phase me anymore. I feel as though, there’s a decent portion of my fans who A) don’t really understand that I’m older and just don’t have time or interest to keep up with everything out there and B)I’m a rap guy. Sure, I make this kind of solo music but my roots and interest are firmly planted in hip hop. So, electronica isn’t really on my radar. Simply put, i greatly prefer music with vocalists.
it is funny though cause, when I tell people that, their immediate reaction is to try and put me on to some shit that will change my mind. Like “I know you’re not into this genre but have you hear “_______”??!?!”. As if, I’m not a fully formed adult with very particular tastes in music that have been shaped over the course of the last 30 plus years.

Is there anything wrong with saying “they’re going to get gay married”, or should you just say “they’re going to get married” now in 2015?
Is it wrong? I don’t give a shit. It’s just phrasing. Ideally, it should just be “They’re getting married” but if someone says it the other way, who cares? I could see it be like saying “They’re getting asian married” and how that may sit wrong with people but, to me, all that word policing PC bullshit is a waste of time. If someone is saying it in a derogatory way,then they’re an asshole. If they’re just saying it cause they didn’t know better? Life goes on. People are such unbelievable pussies about this kind of stuff nowadays and it actually bums me out. It’s like context doesn’t even matter.