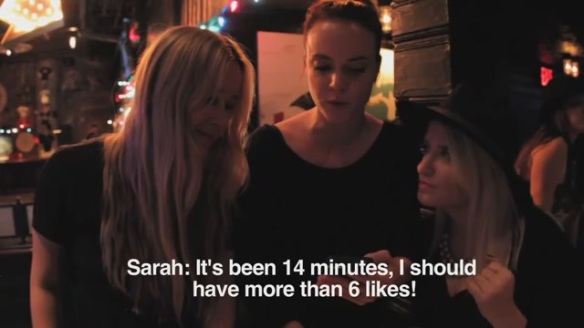 Maybe it’s cause I’m based in NYC but , over the last three days this clip of a youtube based reality show called “The bedford Stop” has been popping up everywhere. It’s pretty much like that MTV show “The hills” except it takes place in Williamsburg , Brooklyn. It’s exactly what you might think…well…maybe not. Remember when people spoke of Williamsburg as the epicenter of hipsterism? It was a while ago but #neverforget. Well, those days are gone and now it’s apparently home to the most basic of basic people of all time. At least that’s what “The Bedford stop” would have us believe.
Avert your eyes, cover your ears, grab a vomit pouch. This is The Bedford Stop. I’m so so sorry.

Now, I could harp on how NYC and Brooklyn are becoming terrible cause of people like this moving in and how it’s changed and blah blah blah. Listen, that’s old news. We all know that it’s beyond the typical gentrification horseshit cause now even the original gentrifying white people hate the new white people moving in. People will actually say shit like “I moved her in 2007 , before all this stuff happened” like that validates anything. It’s double gentrification. I’ve spent enough time complaining about NYC related stuff on this blog over the years and, trust me, I know you’re sick of reading it. Instead, I’d like to discuss these girls. Or, i should say, the type of girls they are. The term “Basic bitch” gets thrown around a lot. sometimes it’s fitting and sometimes it’s seemingly just said to try and make a point with no real merit. But, with these girls…I start to wonder. Where did they come from? How did they become these people? What kind of monsters were their parents to mold such completely worthless humans? It’s a special kind of parental failure that creates kids like this. Instead of being raised on a diet of abuse and fear that might turn a good kid into a troubled one, I’m thinking these parents showered their kids with gifts and entitlement. Everything they wanted was at their fingertips. Coddled and told they were special from the day they were born to the day the left for college, even though they never had an original or interesting thought in their entire life. Creating a vapid , empty, stepford human who’s only point of existence is to eat brunch, drink wine, say “like” a lot, and waste many natural resources.
Now, there is obviously a male counterpart to these awful people but no ones giving them a show. Four vertical striped ,button up shirt wearing bro’s , watching college football and talking about who they fingered last night just doesn’t make for a compelling watch. I mean, neither does a show about these girls but what sets it apart is seemingly the audiences desire to want to physically harm the people on the screen. With every “Um, OMG, did you text you baccckkk?” or “Work hard, play harder!” any self respectful human being with their own thoughts and feelings tenses up. It’s the television equivalent to hate fucking. Nothing new. The Kardashian’s been running that game for years.

But, again, how did we get here? Vapidness is nothing new. Shallow and thoughtless people have been around since the cavemen days, no question. But when and why did being this person become the norm for “basic” people? Like all bad things, I choose to partially blame the internet. For all it’s good, it’s done just as much bad. The youth is a bunch of people who speak in meme’s and emojis. Something which I don’t even think is necessarily bad. But when that becomes all you have to offer? We have a problem. Your existence becomes recycled material. These types of people are basically breathing version of played out internet memes minus the part where they were ever funny. They’re watered down beyond recognition. As an old person who’s well out of any place where what I think is relevant, all I can do is sit back and watch it spread. It’s like the blob but with blonde hair and an ipod full of bullshit. It’s bigger than Williamsburg. These people exist everywhere. In different shapes, sizes and colors. It’s the new norm. Orange is the new black (is one of their favorite shows to watch, btw). All I can ask is, to you people having kids or parents to young children, your job is not create these kinds of people. Do what ever you can. Chris Rock said his only job was to keep his daughter off the pole. Well, your only job is keep your daughter from becoming a girl who might get a professional tinder pic taken and yell shit like “I’m just looking for a husbanndddddddd!” drunkenly at age 22. Please. I beg of you. Make it stop.

14 thoughts on “Things that are wrong with the world vol. 33”