So, I’ve been hinting about a new project a little bit and it’s finally out today. Well, to be truthful, it’s not brand new. In fact, it’s been done for a while (and streaming on one website for months) but it’s finally available to stream and purchase today. I just wanted to talk about it a little cause it’s not the typical Blockhead release.

Blockhead: Art Of the Sample
My new album is a fun side project I did with the good people over at De Wolfe records. If you are unfamiliar with them, they are a music library that has been doing music for film, radio and television for nearly 100 years. They make original music that gets plugged into all sorts of things and has been heard all around the world. If you’re a producer, you have very likely sampled them and you don’t even realize it. Well, I was fortunate enough to have them allow me make an album entirely out of their back catalogue. That’s SO much music. In fact, so much so, that I already have another volume almost done. So this should be an ongoing thing.

What I made is my own library record. These are not typical Blockhead songs. They’re more stripped down and focused for the purpose of being used in tv and film. So, don’t expect 6 minutes songs that constantly change. This is not that. That was not the focus of the album. Think more along the lines of “Blockheads broke beats” , which was my first album ever on Mush records. 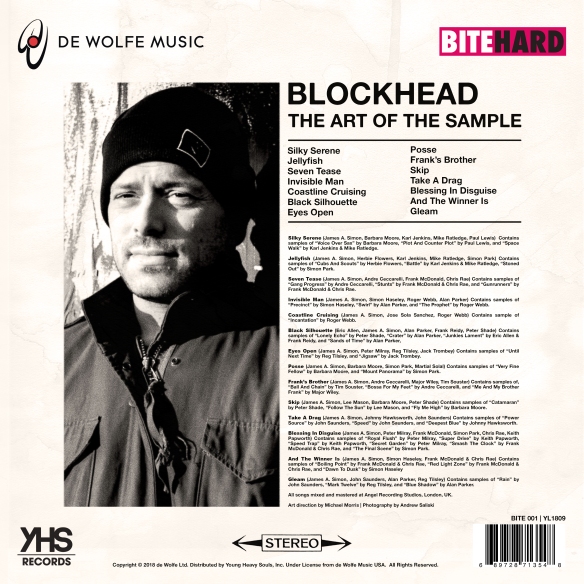 Anyway, so that is the story! This was a fun side project for me to do and I’m really happy it’s finally out there on a mass level. For those curious about physical copies, there will be a vinyl release by the good people at Young Heavy Souls. That’s expected to drop in June and will be a pretty limited run (1000 copies). Here is a preorder link: