A few weeks ago I polled people about men’s summer wear. Namely, what kinda shorts that men wear that are okay with girls. As things often do when dealing with the internet, the conversation spun wildly out of control and landed on the topic of men’s footwear. Not just any footwear though. I’m talking about open toed shoes on men. Sandals, flip flops, jesus’ shoes…those type of things.
Like most people living in a urban environment , I’ve long been deeply anti-open toe shoes for men. I’ll get to the reasons later but , for now, let’s cover when it’s okay to wear these types of shoes:

1)At the beach, poolside or really anywhere where a large mass of water that people swim in.

2)In your back yard.

3)Short walks to the store. kinda the same way one might throw on basketball shorts and wife beater just to go get some eggs from around the corner.

4)In your car if you’re running errands that don’t involve anything remotely social (things like going to the post office, getting a coffee, picking up laundry)

See that? That’s the complete list. There is no other time EVER that man should be wearing Flip flops or sandals. Now, I’m sure some of you sandal wearing people are all ready to argue this with me until you’re blue in the face and the smell of your petrulli oil wears thin. Surely, some of you live in small towns or suburbs where the open toed look on men is mostly accepted and probably pretty typical. For you people, I give you a SLIGHT pass. I don’t approve of your footwear but I can understand how it’s kinda the norm out there. That’s fine. However, even you out of the city folk must know that , if you own a penis, wearing those “shoes” anywhere social, is not okay. To a bar? go fuck yourself. On a date? You should die a virgin. To a party? I hope you stub your toes drunkenly for the rest of your life. That said, this is less about you people than it is the urban open toed people.

Now, you city people, you’re window is much smaller (assuming you don’t live in a city where all you do is drive all day). Basically, if you’re walking around in public , it’s not alright. NEVER. A walk to the corner store is forgivable but anything beyond that, get the fuck outta here. Beyond just social events, I’m talking on public transportation (Being on the L train is like being tortured by a sea of disgusting feet. If I could hack peoples feet off on the train, i would), going out to eat anywhere, even walking to the gym…No one should ever have to look at your feet. Also, have you seen what streets look like? Unless you’re roaming around singapore, they’re fucking filthy. You’re feet are basically just magnets for whatever is near you. good luck stepping in dog shit in your flip flops. I’d imagine that feeling of the shit foaming around the corners as it touched your bare skin is one you’ll never forget…but totally worth it, right?

Now, you might be wondering why this matters and why I’m so against it. Well, in reality, it doesn’t matter. Everything I’m writing is hyperbolized for fun but still, it’s a peeve of mine (and many others) because men’s feet are atrocious looking. They’re big and hairy. They’re veiny and probably smell bad. They’re simply not something that need to be trotted out in public for people to have to look at. It’s kinda like how women who just gave birth don’t go around wearing belly shirts that show off their stretch marks. It’s just common decency to your fellow human. 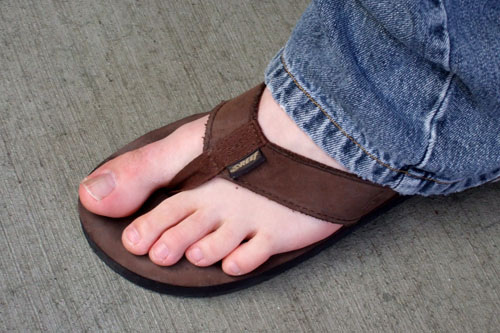 Common arguments for why men wear these things are that they’re comfy , they’re easy to put on and because in the summer it gets too hot for anything that’s not open toed. Let me make my case…
1)They’re not that comfy.
I’ve worn them before in my life. flip flops are actually straight up uncomfortable. The cut into your toes and they’re not easy to walk in cause, well, they flip and flop. Sandals are slightly better but still, they’re limiting in how you can walk. basically you gotta just kinda walk slowly and shuffle you feet. God forbid you have to run in those things. Sneakers, in general, are far more comfortable as they have more support for you foot and ankle and they have better padding. On top of that, they also look a million times better and make it so no one has to look at that awesome hangnail you have on your big toe.

2) Okay, They’re easy to put on.
I can’t lie, they are…but you know what else is? my sneakers that I just slip on and off like sandals. I haven’t tied them since the first week i got them. Besides, If you’re losing too many minutes in your day taking on and off footwear, I’m pretty sure your hectic job does not include open toed shoes.

3)It’s NEVER too hot for sneakers.

This one is my biggest peeve because it’s such a pussy reason. Grown men complaining about the warmth level of their feet is not okay. Unless you’re walking on hot coals, shut the fuck up about it cause it’s simply never THAT bad.
I’ve been all over this country. I’ve been in horrific heat more times than I can count. I’ve always worn sneakers. Was I hot? Sure. But my whole body was hot…cause it was fucking hot outside. I’ll tell you what didn’t ever cross my mind at any point “Man, I’m dying out here, if only my toes were exposed…” . This is one of those “just deal with it and man up” kinda situations. Sure, i suppose an open toed shoe in 115 degree weather would be SLIGHTLY cooler…but does it really fucking matter? You’re gonna be way too hot no matter what and I guarantee you’re not sitting there just obsessing over how hot you’re feet are. It’s not like you’re forced to wear a sweater , long wool socks and slacks in that heat. You’re wearing shorts and a t-shirt. You’re as cool as you’re gonna get. Basically, worrying about how hot you feet are in a situation like that is like drinking diet coke with your super sized #2 meal from McDonalds. It’s a small thing that won’t make a big enough difference to ever matter.

At this point, I realize you’re either with me or against me on this one. So lemme throw this at you, from a more abstract angle. As men, we’re very lucky when it comes to clothing. We dress more casual than women and get away with it. While they’re wearing 4 inch heels, push up bras and spanks, we’re wearing a t-shirt with holes in it and some nikes to the same place. This is simply the one case where we, as men, gotta just deal with the most minuscule inconvenience (that actually isn’t even a real inconvenience) and suck it up. Listen, I’d love to wear sweat pants all winter but I don’t because I have self respect. If you respect yourself and those around you, do yourself a favor and put those goddamn sandals away in your beach bag. It’s the least we men can do. Trust me when I say that most women are not feeling it from both a fashion and more general visual perspective. Sandals aren’t shorts. You don’t HAVE to wear them when it’s hot out. You have choices. So, do us all a favor and fucking stop it. Please. FUCKING STOP IT…MAKE IT STOP.
Oh and obviously, it’s totally okay for women to wear them. They don’t typically have horrific looking feet and I feel as if , with all the sacrifices of comfort they’ve made to look good, they’ve earned the right. 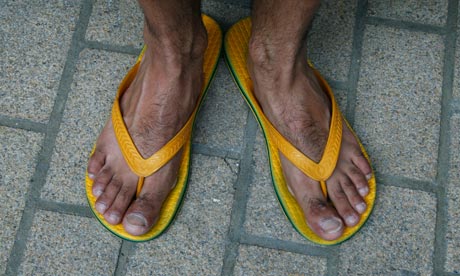