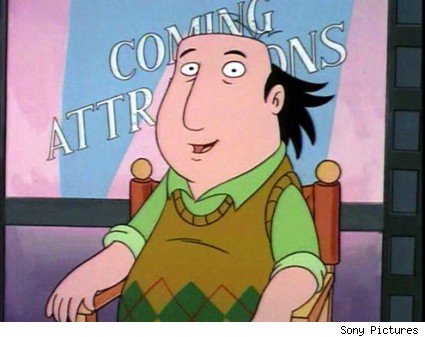 Hi there and good day. In this series, I review movies I have never seen based entirely off their trailers. It’s called reading a book by it’s cover and it’s 85% accurate. Maybe even more. Listen, movies come out all the time…who’s got all that free space in their lives to go a see them? Well, i do actually but fuck all that. Movies are expensive and they mostly suck. So, join me for some sweeping generalizations about movies I will probably either never see or watch reluctantly at 3 am once they show up on cable. Art!

In every young actors career they need that one movie. That movie that comes out years after they have already established themselves as box office gold. It’s a test. Kinda like walking under the bridge and meeting the troll. They’ve made blockbusters. They’ve made critically acclaimed indie films. They’ve done it all…except this one kind of movie. If there was an actor bible it would be page one. “Once your career is going great, Thou must make a convoluted Sci-fi , action movie that costs $100 million , based 80% on the merit of its special effects with a terrible script. The actor must dye his hair a funny color and speak in a marginally recognizable kinda sorta british accent”.
For Channing Tatum, this is that movie. It was only a matter of time. It’s not his fault. It’s how hollywood works. For some, you can come back from it. For others, it’s truly a test of how strong your star power is. Wesley Snipes never recovered. Stephen Dorff went missing after his. Let’s hope Tatum can ride on the strength of “Fox catcher” and not fall a victim like so many young actors before him. God bless and godspeed!

Maybe I’m nostalgic but…I need movies to leave some things from my youth alone. In case of Paddington bear, I have no memories of what he was about. All I know is he wore a hat and a raincoat. I know this cause I owned a Paddington bear stuffed animal when I was a small child. His story of how he became a tiny bear with a hat and a raincoat is not one I’m familiar with. You might think that, hey, perhaps you’d like to find out just how this bear learned to wear clothing and why is he so worried about rain all the fucking time? Well, nope. I’m not. Sometimes, for kids stuff, I just wish things could just be. Can’t he simply be a cute bear with clothes on? Do we have to know everything? Mystery is underrated. Especially concerning things for children. Kids are so visual that all it takes is seeing this bear and they are good to go. They’re all in. Now, I know there were Paddington bear books and I get that this movie will make billions of dollars worldwide. But, i dunno…To me he’s always gonna be that stuffed animal and watching him in his animated “who framed roger rabbit?” glory just seems disrespectful. Shit like this makes me respect Bill Watterson (The guy who made calvin and hobbs) cause he kept that shit on paper. Also, Calvin and hobbes was way fucking cooler than Paddington bear. That dude corny, b.

Backstreet Boys: Show’em what you’re made of

Let me start this off by saying I will 100% watch this movie when it’s available on netflix or cable. I’m a sucker for music docs and this has the potential to be amazing. That said, it will not be amazing. It will be annoying as fuck. Why? Because instead of just tearing the mask off of the backstreet boys and digging deep into the dirt behind the how and why, it will be a cornball ass redemption song about 5 dudes in they’re late 30’s dancing for european moms. I’m sitting here wanting stories of groupies and drug abuse (which you know they have tons of). That would be a fucking movie! Hearing the one who always wears bandanas tell us about the time he pissed on 10 girls at once cause he was too coked up to fuck them. That’s the kind of thing that would take this movie to an honest level of reality. But, nah…it’s gonna simply be them whining about how they were famous once and how it wasn’t really them. Then there will be a brief glazing over of the time between then and now when they all went their separate ways. After that, they will reunite in London to record the new album (as true artists) and then go on tour and dance around on stage in fedoras like it was 1997 again. Yeah yeah yeah…I want coke stories , guys. We all want coke stories. It’s really not that hard.

So, you’re really telling me there are two movies about to come out within a few weeks of each other about Kevin Hart helping a nerdy white dude? Are you fucking serious? You would think the studios would have a clause that says “The actor in the movie cannot make a similar movie to this for at least 6 months”. It’s kinda like when I’m touring and there’s a clause that says “The artist cannot perform anywhere within 100 miles of this show for a month before this show”.
But nope! Kevin Hart is unstoppable. Not in his talent or humor but his work ethic. Dude does not say no. I’m not even mad at him. I don’t find him particularly funny but I also don’t think everything he does is shit. He’s kinda right in the middle with me. So, based on the co-stars, I’m thinking “The wedding ringer” will be shittier than “Get hard”. I think that’s kinda obvious. No disrespect to Josh Gad but, come on bro…Will ferrell is still Will ferrell. Sure , “Get hard” could be as bad as “Anchorman 2” (which would be a feat cause, , holy shit, was that bad) but I still have faith.
Both plot lines have been done to death and are pretty much cookie cutter comedies. The “cool guy fixes dork” concept is as old as any. That said, I’d be lying if I said I won’t watch these on a place or hungover on my couch. I feel like movies like this exist for that purpose alone.