So, I got nothing of great importance to share today. But, luckily for all of us, the internet never sleeps. So, instead of force some random “song of the day” on you, here’s a run down of a bunch of random shit I think you might enjoy. Music, videos, articles, etc…Basically, a gumbo of the things i’ve been into this past week or so. So, dig in…lots of goodies here.

First off, Nahright did something awesome and put together a compilation of all the loose outkast tracks out there. I thought I was up on all their shit but, apparently, i was mistaken. Peep this and download the 34 songs mixtape. Some really great shit on here.
http://nahright.com/news/2014/04/12/mick-greetings-earthling-outkast-rarities-remixes/

People are always asking me at shows , “do you have a recording of your live set?”. Sadly, my answer is no cause, well, if I give that away, what do I have left? People coming out to see my shows is literally the last way I can still make steady money doing music. Some things need to be left alone. That said, there is one recording I did a while back of a live set. It was done during one of my first tours ,in NYC, and it was available on a tour only CD called “The block is hot pt. 2”. That Cd has long since been sold out but the live set is on youtube in it’s completion. So, if you really want to own this, you can still do so…just go to one of those youtube/mp3 conversion sites and Voila!
Here’s the youtube link either way.

My homeboy, good rapper and host of the awesome “Kinda Neat” Podcast, Intuition, just put out a new album. He and his producer, the highly underrated Equalibrum, have been working on this for, oh I dunno, forever? But it’s finally here. Well worth the weight. Dope beats, dope rhymes. If you’re a fan or the more introspective side of rapping, this will be your shit.
Peep it here:
http://itsintuition.com/album/intuition-equalibrum

Speaking of homeboys and music, my Buddy Premrock also put out a new album and I did a few tracks on it. Dope shit right here…Peep it.
http://planetpremrock.bandcamp.com/ 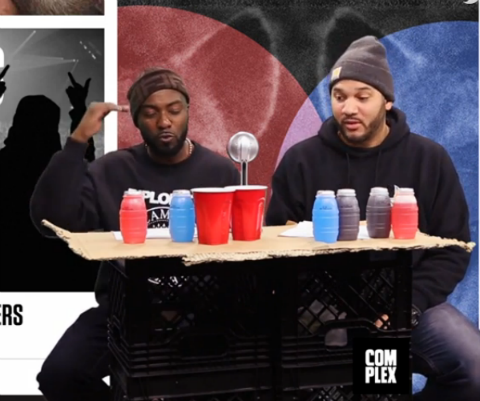 You up on this Desus vs. Mero podcast yet? You might wanna get on that. Basically, the two funniest motherfuckers on twitter (who both happen to be from the bronx) got together and made a podcast. While it was initially just an audio show, it’s now become a tv show, thanks to the good people at Complex magazine. This shit is amazing. If you’re a fan of two hilarious dudes just snapping on everything, this will make your week. If not, you’re a big fucking nerd. Sorry…but you are.
http://www.complex.com/tv/shows/desus-vs-mero

My friend recently put me on to something very awesome. It’s an instagram profile of a girl who draws pictures of the awful men she deals with on OKcupid. I could explain it more but just read this article and follow her on instagram. The shit is hilarious.
http://jezebel.com/genius-woman-responds-to-okcupid-creeps-by-drawing-them-1566157819

The Troy Blog put up this lost gem today. For all you rap nerds, here’s Saafir’s demo tape that he originally sent to the Source. I actually had this back in the mid 90’s but have since lost it. Pretty psyched to get it back.
http://www.thetroyblog.com/2014/04/25/saafir-unsigned-hype-demo-tape-1992/

And I’ll finish this all off with some funny youtube vids…Why not?


Lastly, here’s a full hour long set of Comedian Patrice O’neal from 2004. He passed away last year , right as he was about to really ascend. Anyway, what’s interesting about this is that , in this set, it’s hard to really tell what the crowd thinks of him. He certainly doesn’t “Kill”. To be clear, Patrice was wildly offensive. Especially towards women. So, watching this is both hilarious and nuts cause he simply doesn’t back down from his opinions. He’s relentless. In fact, he buries himself deeper and deeper regardless of the crowds reaction to his jokes. So, while this may very likely infuriate some of you ladies out there (especially towards the end where his entire bit is based on the premise that , in general, men don’t like women) you gotta hand it to the dude for being fearless. Also, guys, you’ll love this.

I’ve done a few podcasts before and they’re always fun. However, this one I did recently is probably my favorite one I’ve done. Why? Cause it’s just two bros talking. The dude whose podcast it is, Intuition, and I are buddies so this is basically just him and I shooting the shit while I casually give my life story to him. So, if you like bro’s talking, this will be your shit.
We discuss my family life, the beginnings of aesop and I, my fanbase, and pretty much everything else.
Check it out!
http://kindaneat.net/blockhead/

If you’ve been reading this blog for a while, you might be familiar with Intuition. He’s an L.A. Based Mc by way of Alaska (indeed, he is the rap game Mario Chalmers and Carlos Boozer). I’ve known him for a while and we’re buddies. But before I ever met him, I was down with his music. While it is often lady friendly (which , at times, can be the kiss of death for male enjoyment of rap music) he manages to keep a nice balance between the soft shit and the real shit. He gets a little emo without going overboard. In a world full of wimpy cutters doing weep-raps, I think we can all appreciate “rapping about feelings” when it’s done right. Well, maybe no all of us but surely most of the people that read this blog. Beyond all that, he’s got a way with words and a smooth , meticulous flow for all you rap nerds out there.
I should also add that his producer Equalibrum is fucking dope. If you’re a good rapper in the L.A. area, get at that dude.
Anyway, Even though he’s been covered on this blog extensively and has been making music for a long time, I don’t see a reason to not push him a little more…Here are some videos:
This is an early one that doesn’t really reflect what he’s doing now but, fuck it…I still like it.

Here’s some more recent shit though: