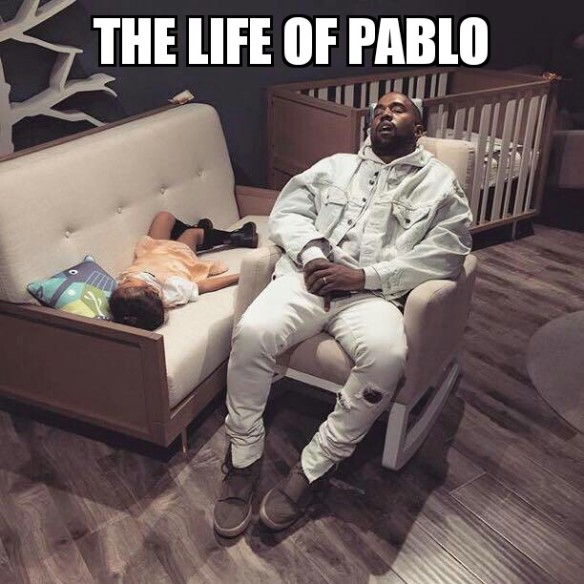 People often ask me to review albums on here and, generally, I prefer not to. Partially cause it’s weird for one artist to judge another artist publicly in detail. In fact, there are only two albums I’ve ever reviewed on here. One was Earl’s debut full length and the other was Yeezus. Why those two? Cause they seemed to be such divisive albums that I felt people on both sides of the argument were being ridiculous about. You know how the internet is. It’s black and white. Well, I’m a grey area ass dude. So, allow me to chime in on this whole Kanye “The Life of Pablo” album.
Little back story: I enjoy Kanye West. Sometimes. I think Yeezus was his worst album but it still had a few very good moments. Kanye is not a great rapper but , he can be entertaining. I enjoy when he raps more than a lot of people. That said, I also think he’s delusional and that he truly feels his shit might not actually stink. So that’s where i stand on him prior to even pressing play on this album.I generally appreciate his gumption and enjoy like 3-6 tracks on every one of his albums. I’d also like to add I’ve purposely avoided reading reviews of this album cause, well, music critics are generally dickheads with agendas that don’t reflect anything that matters. Kanye think pieces are as dumb as anyone who caught feelings about Beyonce at the superbowl.

I’m traveling in europe right now so there is plenty of downtime. Yesterday I took a 4 hour train across Russia and decided that would be the time to sink my teeth into “The life of Pablo”. What better way to really hear an album than to listen while looking at snowy emptiness whipping by you at 200 miles per hour. Admittedly, I rarely sit down and listen to albums front to back anymore so even doing this was a foreign experience. Well…one I haven’t done in a long time.

So, what do I think? Well…I think this is album is complicated. It’s got some great moments. It’s got some terrible moments. More than anything, it’s all over the place. It’s equal parts lazy and out there. This is Kanye’s “Nigga Please“. In case you don’t know what I’m talking about, I’m referring to the ODB’s sophomore album. An album that spawned “Baby I got your money” and not much else. That said, it was a masterpiece of dysfunction. Entirely produced by a, at that time, little known duo called The Neptunes. “Nigga please” was the work of a man unhinged and the people around him who were able to pick up the pieces. A man who was extremely high all the time and given the keys to do whatever he wanted. I’ve heard stories of ODB refusing to come to the studio to record anything unless they paid him 20k for that day. Then he would go in, ingest mass amounts of various drugs and freestyle. I don’t know this to be fact but, you know, if certainly sounds like it at times. Listening to the album, it’s obviously cobbled together. He no doubt did a bunch of cracked out little takes and left the rest for The Neptunes to clean up. Now, it’s a mess of an album BUT it’s also as pure as it gets when showing what life as ODB was during that time. It’s actually a beautiful time capsule. That’s a long digression but “The life of pablo” seems to be that moment for Kanye. The main difference is that, no matter how off the deep end Kanye goes, he still is rooted in his songs having melody and catchiness to them. Where as “Nigga please” could not have cared less about you humming along to it.

Here we have one of the most famous men on earth, married to one of the most famous women on earth. He is loved and hated like very few other people on the planet. He’s richer than god. Much like eminem before him, rappers who become rich and famous kinda run out of relatable things to rap about. Kanye isn’t an underdog anymore. He’s a super nova. He’s also manic and quite possibly doing way too much cocaine. And that leads me to this album being a somewhat a shit show. But a very watchable shit show. Like “love and hip hop” or “Intervention”. I don’t have credits for this album but I’m fairly certain he didn’t make a single beat on it. He’s past that. He now sings and raps. Sparingly. Part of me feels like he’s so fucked up in his own head he’s abandoned song structure due to his mania…but, then again, maybe this is him saying “Fuck pop song structure!” and just doing what he feels. I guess we’ll never truly know, even though you can guess which one he’d cop to.

Okay, enough speculating why kanye does what does he does. Let’s talk about the music. That’s what this is about.
The album starts with “Ultralight beam” which is both messy and awesome. Kanye babbling over a gospel chorus , with a minimal yet powerful backing track that just works. It’s one of those songs that you can listen to late at night, walking home drunk, even though it’s seemingly talking bout some jesus shit. Or maybe he isn’t? This is a reoccuring theme on the album. Kanye rarely is talking about anything specific. Unless it’s personal stuff about his family, fame or dick, it’s mostly just gibberish being displayed as something like a sermon. Also, it should be noted that Chance the rapper delivers the best verse on the entire album on this song. It’s not even close. This song is dope though.

That song is followed by “Father Stretch my hands”. It’s an autotune, uplifting song that has Kayne singing about bleached assholes. I know there is a large group of people who hear autotune and kanye and throw their hands up in disgust. i get it. But, you know, he’s gonna do what he’s gonna do. It’s still kinda catchy. My major critique of this song is that it, I dunno…seems like it isn’t finished yet. It just sorta ends. I guess that’s cause it’s a part 1 , followed by “Part 2”. The wailing gospel vocals are the only bonding factor of the two songs. This one one features newcomer Desiigner, who’s basically like Future but obsessed with panda’s for some reason. Like, seriously, what the fuck is up with this guy and pandas? He’s worse than me and sloths.
Much like the part 1 of this song, it ends abruptly for no good reason. Kanye has created a cache for himself where he can do that kinda thing and say it’s his process or whatever but it just sounds lazy and poorly executed.

The next song is “Famous”. Rihanna sings on the beginning then vanishes, which is fine. This song is kanye at his cokeheadiest. It’s him rapping about his fame. Thing is , think about it…this is what he knows now. This is an honest song about his life. Now this song has extreme ADD and I wish someone would throw a Muzzle in Swizz beats mouth but there are parts in this that are just awesome. Like the reworking of Sister Nancy’s famous “Bam Bam” is fantastic. So subtle but that’s the kinda thing that jumps out to me, as a producer. Then he throws a nina simone vocal at the end. Why? No clue. It doesn’t fit the song but , overall, this is yet another mess of a song that somehow manages to work on some level.

“Feedback” sounds like a Yeezus outtake. He’s at least he rapping on it but, still, ultimately, it’s forgettable. That’s followed by “Lowlights” which is just a skit of some woman talking about some shit. Who cares? I suppose that’s there to prompt “Highlights”. It’s a weird attempt at a catchy song. Cause the “we only making the highhhhlights” part is the catch. Then it changes up and he spends like a minute dedicating the song to a dumb line about girls in equinox being freaks or not. It’s just another example of his focus being all over the fucking place. Sure, this is a meandering song but has parts that could make a coherent song in the somewhere…but Kanye don’t care. Cause, like, he’s a genius and shit.

Other songs worth noting are “waves” which is like a mix between Ushers “Love in the club”, Beyonce’s “Drunk in love” and Kanye’s face buried in a pile of that good white. This one is as close to a “single” as this album will get. it adheres to a more typical song structure and I think chris brown is on it.

“FML” is a song I’m drawn to. It’s similar to “Ultralight beam” in that it’s good cause of the sum of it’s parts. It’s a mood and it works. Sure, it’s self indulgent but when he’s being introspective, that’s when he’s at his best. Even if his “depth” rivals two teenaged girls having a heart to heart.

“Real friends” was an early leak and it’s cool but I also think it’s pretty boring. I get why people like it though. I much prefer “No more parties in L.a”. It’s just a classic, good old rap song with a good beat with some dudes talking shit. Nothing wrong with that. This is the “bound” of this album, in the sense that it’s what old Kanye fans want to hear but it’s also a relic of his past. He knows he can’t make an album of songs like this and he wouldn’t even want to. It’s more of a “Hey, i could if I wanted to but nah…” kinda song.

The last song that matters is “30 hours”. Dope beat. This is a classic Kanye kinda song. Problem is his self indulgence rears it’s ugly head at the end.And not the good kind I spoke of earlier. I’m thinking this song may be called “30 hours” cause that’s how long he lets the fucking beat run at the end. Not only does it run but he babbles line ideas and takes a call from his manager. It actually gives an interesting insight to his creative process. Or, I should say, exposes it for what it is. Just a dude in a booth flying by the seat of his pants. And in an epic example of classic Kanye trolling , the song feature Andre 3000, who only sings the words “30 hours” a bunch of times. It’s actually incredible he had him do that and nothing else. It’s such a dick move that I can’t even do anything but respect it.

The rest of the album is pretty forgettable, in my opinion. Overall, I think it’s a step up from Yeezus. Kanye still makes compelling, catchy, self indulgent, and flawed music. He’s not a genius. He never has been. But he’s a fucking weirdo with mental issues and , honestly, those are the people making the most truthful music out there. When you lack a filter and people around you to tell you “yo, chill”, it’s hard to not keep the insanity pure. I think, in 10 years, no one is going to look back on this album as one that mattered much in his legacy but, at the same time, it might be one of those sleeper albums that sneakily finds its way into peoples heads against all logic. Kanye gonna Kanye, and this album kanye’s all over the fucking place. For better of for worse.