Well, all good things come to an end. Even all mediocre things come to an end. The Rogglecast is no different. Due to personal and ethical differences , Pollyne and I are no longer going to do this podcast. Just kidding (about why we’re not doing the podcast anymore). The real reason is Pollyne is moving and doing podcasts over the phone sounds awful. So this is the final installment!
In this episode we talk about Po’s move, lumbersexuals, Blow job bibs and how OCD we are.
It’s been a fun run and I wouldn’t shut the door entirely on this podcast thing for either of us. You never know.
So, enjoy and bid us a fond farewell. Peaaaaacccceee…

You know, it’s been a great week for “Open letters”. That’s a code word for essays by famous people with something they feel the need to expose. I suppose, this could be considered an open letter if I was more famous. Instead, let’s just call it a blog post. That way we can strip away all the ideas of what I’m saying being even remotely important.
So, anyway, recording artist Moby recently wrote an article about how he left NYC for the sunnier side of things in L.A.
http://www.theguardian.com/commentisfree/2014/feb/03/leave-new-york-for-los-angeles
He’s not the first or the last and , honestly, I don’t blame him. It’s a different lifestyle out there and I can certainly see how it might be more suitable for all sorts of people. The thing is, Moby felt necessary to write an open letter explaining his move , as if any of us give a shit where Moby lives. Now , before I get into this let me share a few things about my history with Moby.
1)I do not know him (Pretty sure we are eskimo bothers though)
2)I like that tea he makes
3)I’ve never been a fan of his music.
4)When I was in my early 20’s, I saw him at a weekly party I used to go to and drunkly tried to start a “Fuck Moby” chant. That was my bad. I was drunk and young.
5)My song “Carnivores unite” is based on him. Well, not him so much. When I made the track, I jokingly felt it sounded like a Moby song, so I called it that as an answer to it ever being mistaken for one. Cause, you know, he’s a vegan and shit.

That’s it.
After reading this article I learned a few things about Moby I didn’t know.
1)He’s was born in NYC. No shit! This surprised me so I wiki’d him to read more.
What he didn’t mention was how didn’t grow up there. So, in a way, that kinda makes him one of those “Oh, I’m from NYC cause I came out of my moms vagina in a hospital that was located in NYC”. When, in reality, he’s actually grew up in Connecticut. Nothing wrong with growing up in Connecticut, it’s just even mentioning he was born in NYC is misleading…as if that makes his move to L.A. even more valid and heart wrenching..
2)He apparently lived in the play “Rent” in the early 80’s. In fact, he might have lived on the same block my sister lived on during that same period of time. It was indeed a mess…thugged out drag queens and heroin everywhere. The good old days. 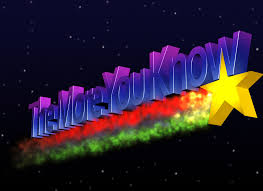 Now, here’s the thing, none of the complaints that Moby is talking about are wrong. It’s all well worn territory. Yes, NYC is too expensive. Yes, it’s competitive. Yes, it’s landscape has changed greatly. Even the most blindly loyal NYC person can’t front on those things. Hell, a friend tagged me in this pic on facebook of 14th st and 7th avenue from the 70’s and I almost shed a single tear. 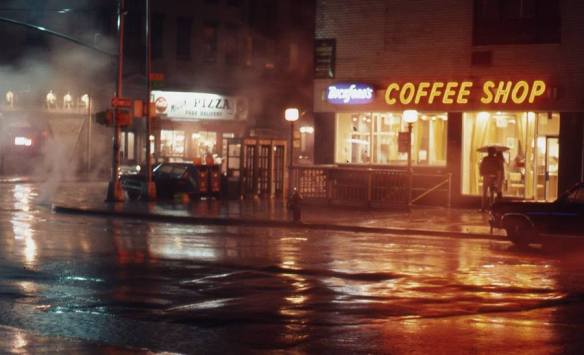 Look how awesome that was. But you know what? I wasn’t even alive when that existed. I was alive in the NYC in the 80’s though. And, without question, NYC was better then. Of course it was! All old things are better. This is all “fact” that has been rehashed over and over again. So, for that point, I could never argue with Mobe-dawg. Granted, he’s an extremely successful musician who can afford to live anywhere. His old crib was in Little Italy and , I’m told, it had an elevator in it. Not in his building…in his apartment. The point of that is , dude is rich. That’s even crazier considering I can’t remember the last time he put out music. If I recall, after he made himself famous by making slave hymns danceable , he started singing a little and people stopped caring. I could be wrong but that was my outsiders perspective. Whatever the case, he’s not hard up for money. So, this move clearly isn’t about that (as much as he does harp on the price of living). No, this move is about how NYC effects creativity. His whole reason for leaving is cause , with how NYC is now, he can’t be the kind of creative he needs to be. NYC doesn’t allow you to fail, is something he harps on. But you know what? I’m okay with that. While I think that’s a fairly black and white way to look at it, it’s true that this city has been known to chew people up and spit them out. That’s kinda the point. Not everyone is supposed to be able to make it here. Even Frank Sinatra knew that. But, let’s remember, this is Moby talking. A person who has not failed. But what about his creative friends?!?! They live in deep dark brooklyn and that’s just not okay with him.Again, keep in mind, this is a rich person talking who can afford an elevator inside his apartment and the best music studios the city has to offer. He’s not stuffed in a 200 square foot apartment with two roommates, banging away on his acoustic guitar , recording on a four track while the sound of firetrucks blare in the distance.

I spend a lot of time trying to demystify the musical process. When people get all wishy washy about some vague “inspiration” they require or they feel a room needs candles and incense , I call bullshit. However, I’m me. I don’t need that shit. Maybe others do. So, it’s really not my place to tell another person how to feel or what gets their engine revving, creatively. A change of scenery can be refreshing, without question. Personally, I find I’m at my most creative when I return to NYC after beign away from it for a while. I don’t doubt that Moby will go to L.A., live in some huge house in the hills and toil away in a home studio he built making music he really loves. I get that. But, if that’s the goal, just go do it. Move to L.A. and get those creative juices flowing. Shitting on NYC with the same complaints people have had since the late 90’s isn’t doing anything. I think the thing that has always annoyed me about Moby is that, while he’s an intelligent and talented guy, he’s also kind of a pussy about everything. He’s always been the poster child for people who get offended easily. That mind set and being in NYC never really clicked with me. It’s almost as if he was destined to be out west where things are slowed down, more free spirited and less aggressive. That makes total sense. As much as he loves/loved NYC, perhaps it was never for him. Too rough around the edges for a man of his sensitivity. And, like I’ve said, there’s absolutely nothing wrong with that. The same way I might have a panic attack if you dropped me in a forest somewhere, NYC is 100% not for everyone. Perhaps Moby lived here so long cause he was based on the east coast and just assumed that that’s where creative people go? When, in actuality, he was a west coaster in his heart the entire time. I say this cause, while I agree with his issues with the city, it’s never gotten to me (Or most people I know who are from here). It’s just some things we accept in exchange for all the awesome parts of living here. The good and the bad. Maybe , in three years, Moby will move back east and write a 2000 word essay on how much he can’t handle traffic and how fake everyone is in the L.A. music scene. I suppose we’ll have to wait with baited breath for that one.
In reality, I think he just got bummed out because of this terrible winter we’re having. It’s been cold as fuck. Who doesn’t want to be in 80 degree weather right now? Well…actually…maybe no Moby cause I feel like with his fair skin he might just burst into flames in that dry so-cal heat.
So, to Moby, I say, Bon Voyage, I’m not mad at you or bitter (i don’t know you, how could i be?)…I just think you’re corny. That said, if more people took it upon themselves to reevaluate if they belong in this city, then left this city, it would undoubtedly be a better place. So, hey everyone, listen to Moby! NYC is dead! Leave as soon as possible. The rest of us stuck here will be forced to deal with it. Oh well. Someone’s gotta do it, right?