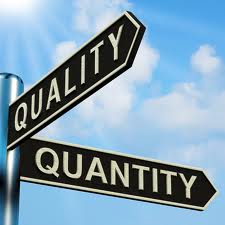 Earlier this week I was looking through my Facebook feed and a friend posted a link to an article. It was about the idea of Quantity over Quality in music. It basically said that, the more productive you are , the more you will progress as an artist. So, while , sure, you may make a bunch of crap a long the way, the end product will eventually be better and more evolved. Here’s that article for reference.
https://medium.com/better-humans/3bc2b16fe3f5

It was something I’d never really thought about as a person who makes beats. As a consumer, sure…but not as the actual creator. Then, a day or two later, Hip Hop Producer (and writer) J-zone posed this question on his Facebook page:

Then I get this somewhat related question for my “Answers for questions” column:
Have you ever been really blocked and not able to make music? How did you overcome it?

Well, since it seems heavy on peoples minds, I figured I’d weigh in.

I think quality and quantity are two separate things. An artist can have both , neither or only be functional doing one at a time. While I see the point of the first article and agree on some level, you can’t really deny that , for every person making 50 beats a month that suck there’s a guy painstakingly crafting two tracks that are on an entire different level than anything that quantity guy is working on. Thing is, perhaps the quality guy is just more talented?

There’s a producer I used to be friends with who told me he made 30 beats a week. That’s absurd but I believed him. When he played me his beats, it was clear that he wasn’t lying. They were all dead behind the eyes and as minimal as possible. In reality, he started 30 beats a month and finished none of them. But even that didn’t matter cause what he was doing was basically throwing shit at the wall and seeing what would stick. Out of the 30 beats he made, maybe 2 or 3 were decent. So, a months work resulted in two or three decent tracks. That’s not terrible by any means if you think about it. In fact, that was seemingly his goal.

Then on the other hand, I know many producers who will slave over one track for weeks. Tweaking hi-hats, replacing drum patterns, layering synths and stripping down samples. Over and over again. These types feel like every beat/song is the end of the world. While I applaud their craftsmanship , if you finish a month with two beats/songs finished and neither of them are even that great, you’re even worse off than then quantity guy.

I think it comes down to a few things that are way more important than just how productive an artist is.
1)Are they actually good at what they do?
It’s simple really. A good musician/producer is going to make good music. A not so good musician/producer is not. Anyone can hit a bullseye eventually so the laws of averages do work in favor of the quantity people but if you’re simply not talented, all the quantity in the world can do is help you hit your low ceiling as an artist.

2)Are they, like J-zone says, just making shit so they can stay relevant?
This is a real 2014 issue. The listeners ear has never been more forgetful. 5 months on the internet might as well be 2 years. The same way I’ll play a show somewhere and 2 weeks later someone will ask “When you coming back?”. That’s how people look at music now. So, I fully understand needing to keep pushing along and making music. As artists, we’re supposed to continue our creativity. That said, if you’re doing shit just to do it and not cause it’s coming from any place of inspiration, then you’re basically just treating music like your job. I’ve certainly had moments like that, where I had to kick start my creative juices by forcing myself to work when I didn’t feel like it.It’s natural. But if that’s the ONLY way you create? Join an advertising firm or something.

3)Being aware or your own quality

Most musicians hate everything they make. That’s natural. They may like it for a week or two but eventually they loath it. Same reason we all cringe when a fan tells us their favorite album is our first album. We hate that cause that first album was made during a totally different time in our lives that we can’t even relate to anymore. Admittedly, having an album people like at all is a luxury problem but still…
Because of this self loathing, one of the toughest things for a musician is gauging the quality of their own work. Sure, every now and then, you hit on something and you know it. It gives you that feeling. But, in general, being able to step back from your work and look at it as if it’s not your own is never difficult. The fact J-Zone had apparently worked on something for a while then just stepped back and was like “This shit is garbage” the threw it all away is pretty amazing. I know a bunch of artists who’ve done that but it’s usually more of an abortion than dropping the baby in a dumpster (I mean that in the best possible way). scrapping a beat in it’s early stages cause it’s not going anywhere is way more common than making something that’s almost done and realizing “This shit sucks…” and just deading it completely. That’s some bold shit. But it’s also some shit I take my hat off two cause that’s a level of self realization few artists could ever have.

Now, for me personally, I fall somewhere between both quality and quantity. I work in spurts. I’ll make 8 beats in a week and then not touch my equipment for a month. It all depends on my mood. I feel that, when I do get in a creative groove, it flows pretty naturally and the quality is pretty decent. Also, I’m not one of those producers who hates everything he makes. I generally like them all on varying level but never love anything. Kinda like if I was a single guy and had a bunch of girls I slept with but never had any plans of wifing any of them up. That’s how I am with my beats. So, for me, quality and quantity are not related. For all the talk of people feverishly working and making 1000 tracks a year as a means to evolve as an artist, I’ve found some of my best moments have come when I’ve returned from a hiatus with recharged creative energy. Sometimes an artist can evolve by simply living their lives and coming back to creating when it feels natural. Not just burying yourself in work.

In the end though, everyone has their own methods. What makes me better might not work for the next guy and vice versa. So, in general, the best advice I can give to anyone making music and asking these kinda questions to themselves is “just do what you do” and avoid reading think pieces on completely situational and arbitrary things like what I just wrote right here. Oops!